Testament to Murdering An Extract 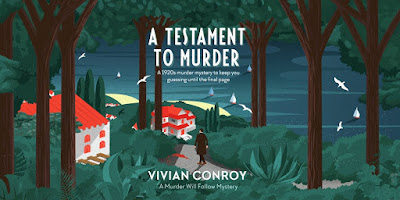 A Testament of Murder by Vivian Conroy first came on my radar after reading that this has an Agatha Christie vibe to it (A mix of And Then There Were None and Crooked House, apparently) and seeing as I am planning to read a lot of Agatha Christie this year, I got excited when I was asked if I wanted to be involved in this tour!

A dying billionaire decides on a cunning and ruthless plan. At midnight every day, he appoints a new heir to his fortune. If he dies within the 24 hours before the next midnight, the money will go to that person.

But his beneficiaries aren't normal people. Men who he has crossed, women he has deceived, distant relatives he has wrong. Each with their own dark reasons to want the money and are will to go any lengths to get it. And all that's stopping them is a retired Scotland Yard investigator who must stay two steps ahead...

Like I said, this is blog tour and I have an extract to share. Hopefully, this will wet your crime-solving appetite. And before I hand it over to the extract, I would like to thank Ellie at Canelo for inviting me onto this tour!

Oh, if you want more info on Testament of Murder, check out the Canelo's website or if you want to say to the author, Vivian Conroy, pop over to Twitter and find her at @VivWrites. Now, ONTO THE EXTRACT!!! 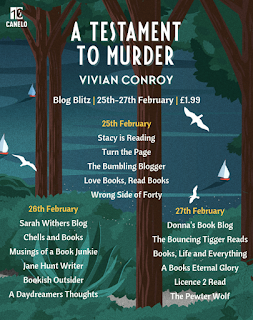 In his head he shouted it aloud, until it echoed off the cliffs below. He used his handkerchief to take the vial out of the cigar case and then tossed it away, as widely as he could. He stared desperately at the sparkle of it as it tumbled in the air, trying to determine if it would drop into the safe depths of the immeasurable waters. It was gone already and he had no idea how far it had gone. He didn't know if he was safe.
If he would ever feel safe again.
He turned his head and looked at the villa, holding his breath. Was there movement at a window? Had someone been watching him? Did any of the guests know anything?
Had it not been Malcolm, but somebody else? What for?
Howard wiped his face with both hands as he tried to calm his thundering heartbeat. He looked at the water again, as if trying to gain courage from the calm waves rolling to the shore.
But… what was that?
He tilted his head.
A boat? Turned upside down?
A sickening sensation raced through his entire body. He ran down the steps calling one name, over and over again.
“Kenneth! Kenneth!”
Posted by Pewter Wolf at 08:00:00