Audiobook Review - Beneath The Sugar Sky 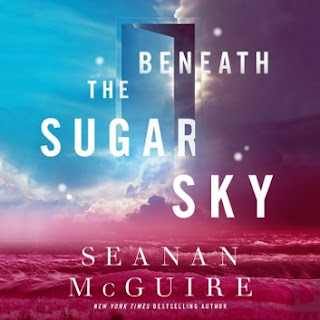 I have been dodging listening to this instalment of the Wayward Children series, even though it has been calling me for quite some time. Main excuse I had was I didn't want to spend so much money on an audiobook which was just over 4 hours long. But when I decided that I might - MIGHT - cancel my Audible account, I knew that I would use one of my credits on this. Then I held back because I wanted to listen during the Bookemon Readathon I decided to take part in throughout May.

With this being a direct sequel to Every Heart A Doorway (both Down Among the Sticks and Bones and In An Absent Dream being prequels), Beneath The Sugar Sky follows a character called Rini who literally fell out of the sky and splashed into a pond of Eleanor West's Home for Wayward Children, desperate to find her mother, Sumi. But Sumi is dead. She was murder in Every Heart's A Doorway, and now, Rini's reality is changing and slowly, she is being wiped out of existence.

Sumi must come back to life, because Reality is going to notice that a girl that shouldn't exist is existing. It's a good thing that Rini has landed in a school where the student body is well equipped for a quest...


I weirdly liked this. Now, I'm not going to admit that I loved this or that this is my fave within the novellas I have read within this (I haven't read Down Among the Sticks and Bones and I'm not sure if I will, though I have heard that I might have to for the fifth instalment of the series...) as the issues I have with the novellas I have read are the same issues I have here.

But more on that later.

I really liked this story as it expanded the world that this series is set in. It shows us more worlds that the children have gone to - the Underworld and Confection - and talks about other worlds in more depth. I liked we had more from characters from Every Heart a Doorway (I didn't realise how much I missed Kade, Christopher and Nancy till they came back) yet they didn't overpower the new characters such as Cora (who I loved).

This series continues to build on the magic and fun yet continues to have that dark edge to it, showing how fairy tales are quite dark when you scratch under the surface. Plus, the level of diversity within this series is breathtaking. We have gay characters, trans characters, plus-size characters, characters wearing hijabs and characters tackling issues such as mental health, fat-shaming, suicide, and not once did it feel out of place. 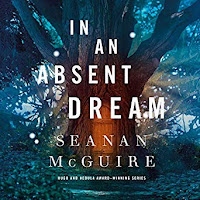 However, like I said before here and in my write-ups of Every Heart A Doorway and In An Absent Dream, there are times it feels rushed and skims over details. It's as if the stories are telling us things yet they're not showing us. I feel like if these books were a fractured longer (not by much), it would feel better for me. I do know that some people don't like these novellas size as it feels like the idea is better than the actual novella.

There are two details that I want to point out. Cora is a plus-sized character and I found her endearing, but I understand some readers complaints that Cora seeing herself and how the narrator deals with her being "the aft girl" is kinda smashed over the reader's heads. And Rini... oh, Rini. She is a character I had real problems with. She is whiny, weak and I didn't find her character endearing. I didn't realise till a good way through the audiobook that she's sixteen/seventeen years old and yet, she aged much younger. I didn't warm to her and, because of that, there were times I did want to quest to fail so I didn't have to have to hear her whine the word "Please" again.

I did like this instalment - honest - and am considering reading/audiobooking the next instalment when it comes out. But if you are going into this, please go back to Every Heart A Doorway so it makes sense to the timeline...
Posted by Pewter Wolf at 08:00:00