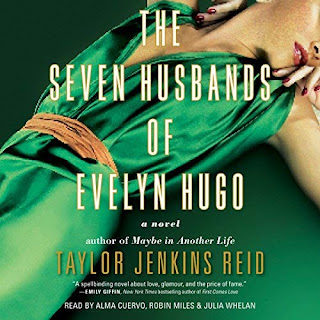 It feels like everyone - and I mean everyone - has read Evelyn Hugo and is raving about it. And it was’t till recently that I decided to go for it with this, though I have been eyeing the audiobook for months.

Monique Grant just can’t believe what’s happening to her. Her professional life is going nowhere and her husband has left her, so when she is picked to do an interview with ageing and reclusive Hollywood icon, Evelyn Hugo, she can’t believe her luck. And the fact that Evelyn demanded her or she wasn’t going to do the article makes everyone astounded. Why did Evelyn Hugo, who could have anyone she wanted, want Monique, a nobody of a journalist?

But it gets weirder as, when Monique meets Evelyn, Evelyn tells her that there will be no article. Instead, Evelyn wants Monique to write her biography and publish it after Evelyn’s death. It would be a bestseller without even trying as Evelyn is Hollywood royalty and her love life and her seven husbands filled articles throughout the 1950’s all the way through to the 1980’s when she left the industry. Monique wants to do it as she has two questions she wants answered: why did Evelyn so desperately wanted her to write her biography and who was the love of Evelyn’s life?

The answers to both are surprising and devastating.


Ok, let’s get this out of the way: you all are right to love this. I found this such a good story. I’m actually at tad surprised over this and I am not a historical reader, but I found this quite refreshing and with all the subjects this book touches on (racism, sexism, homophobia, domestic abuse, cancer, death, etc), am surprised how this book is in the general fiction as I can’t help but feel that with any other publisher, it would be mis-sold or put in the wrong genre.

Like I said, this really surprised me because it doe tackle a lot of issues, but because Evelyn - the star of the book, let’s get that clear - is a woman who is so compelling. She is complex and messy, but that makes her so interesting. She is ruthless, cutthroat, unapologetic and, at times, not a nice character - but she is flawed, a hard worker, and when she cares deeply for someone, she will stop at nothing to love, care and protect them. Even if that means doing some morally grey stuff.

Because of this, I am very tempted to buy the book and read it as, while I really enjoyed the audiobook with its three narrators (the first voiced Monique, the second did Evelyn and the third did all the newspaper articles and gossip columns), I feel that reading the book will give it an extra flavour.

I am going to be admit that around the second husband, I did stop (and I did a week of podcast listening as got super behind) because I wasn’t really with it (I can only blame hay fever and not finding time to listen to it). Plus, because Evelyn is the star of the book, all the other characters feel a bit grey, even though they play a huge role in Evelyn’s life (Monique, Harry, Celia, etc…), though we must remember that Evelyn is telling her story, no one else’s hence why I think this is why…

I did like Evelyn Hugo and I really want to see this get more attention. I do have Taylor Jenkin Reid’s newest novel, Daisy Jones and the Six, and I have heard really good things about that. But Evelyn has caught my heart and I would love to see more people being aware of her…
Posted by Pewter Wolf at 08:00:00