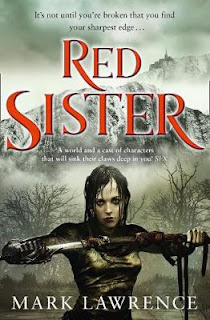 I seem to have come late to the party with this series, but have only been made aware of this series a few months back via several book bloggers and vloggers raving about this series, excited that the third and final book in the trilogy, Holy Sister, was about to come out.

After chatting to a few people on Twitter about this and becoming super intrigued, the lovely people at HarperVoyager sent me a physical copy of Red Sister and, after chatting to my lovely book blogger partner in crime, Luna from Luna’s Little Library, we decided to buddy read together. While she read this within a week and eagerly bought the rest of the series while still reading Red Sister (we’ve all done this, don’t you lie now), I read a little slower due to lack of time to read. Actually, this took me about a month to read - and I took a small break around three quarters of the way through (but more on that later).

In this high fantasy, the Convent of Sweet Mercy isn’t a normal convent. It trains young girls and women to become assassins. To become a Red Sister, it will take ten years to learn the ways of the blade, the fist and the poison. So where does eight year old Nona Grey fit in? She was an unwanted child from her small village, sold to a child catcher and then taken to a fight ring and the abbess of Sweet Mercy takes a great interest in her…

I feel that if I go any further into this, I might spoil one or two elements.

So, where the heck do I start?


I feel quite comfortable in reading fantasy (hard to believe, I know), but I did like this, though it is a little higher and dense fantasy than I am used to (I think I’ve seen some bloggers say this book is a grimdark - never heard that before). But I did like it. I’m a little surprised how much I liked this as this is a dark brick of a read (500 pages). I do like the dark edge this book had and the characters had, Nona especially has a dark past and a bit of a bite to her.

Plus, the story develops over a long period of time. The book starts when Nona is around 8 years old and ends with her being in her early/mid teens. And if this is the case with the rest of the series, we are going to see her and her friends/enemies/teachers grow older.

You would think this is a story-driven novel, but it’s very character-driven and that’s one of the things that kept me reading. I really enjoyed reading these characters and learning about them, the good stuff and the bad. I have to admit there were a few times I did see the twist with character development coming, but it was interesting to see how the other characters grew and realise what I suspect.

I have seen some reviews say that this was classed as YA and my response is “Nope. It’s definitely adult fantasy”. It’s very dark, very gory, and very complex with character development and other elements which are hinted at but I sense will make a bigger part of the story as the series continues. I do think this has crossover elements to it, but I think people call this YA as the main characters are young girls who are growing into young women so it’s an easy fit to call it YA. Please be warned that this is a dark adult fantasy so be warned.

If you looking for a YA assassin novel, I would say His Fair Assassin series by Robin LaFevers might be a good place to go. It’s more historical YA with romance at its heart, whereas this is grown-up, dark and very bloody. 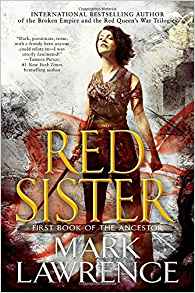 Like I said earlier, Red Sister is more higher and denser fantasy than I am use to, and, because of this, I did have to take a few days break around three quarters of the way through as I needed a take a breath and regroup. I kinda now wish I didn’t as I think I would have powered through and really enjoyed the messed-up ending. But I feared I was about to hit a reading slump as needed a small break. This helped a little and it makes me intrigued to figure out what the next happens next… Plus, I do wonder if the middle was a bit slow and dragged a little, maybe adding to my “I need a break from the grim!”

Oh yes, I have plans to read the rest of the series. Grey Sister is the second book in the series and Holy Sister is the third. And I will have to go out and get physical copies as am weird about how I start/finish a series (even though I really don’t like the UK covers! I much prefer the US covers - very Joan of Arc), though I am going to admit now that it will take me time to read as this series is a lot darker fantasy than I am use to.
Posted by Pewter Wolf at 08:00:00