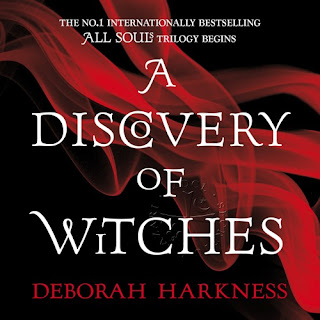 My first #re3 of 2019! I know, it’s six months and I only start to reread and relisten some titles (and I have a rough number of books I wish to reread or relisten to this year. I need to get my rear in gear over the next few months). So, let’s get the book info out of the way!

Now, with my #re3 posts, I don’t do reviews. Why would be the point of doing a review of me rereading or relistening to a story I enjoy?

I’m not sure if I should explain what this book is about or not? Normally, I don’t think I do, it’s so long since I’ve done a #re3 or a reread post, I’m not trusting myself. So, let’s pretend that I do know what I am doing and we’ll carry on from there.

In Oxford, Diana Bishop discovers an myserteous alchemical manuscript in the Bodleian Library. It has magic on it and, as Diana is a witch who refuses her magical heritage, returns the book back to the library. But the book has been missing for centuries and now, every witch, vampire and daemon is watching Diana, waiting for her to call it back. But Diana’s careful world, the world she’s built for herself since her parents deaths, is beginning to crumble and come apart. Enter vampire Matthew Clairmont, who has been searching for the manuscript for over a century or more. As the two begin to figure out why this manuscript is so important, the two begin to grow closer… there are rules saying vampires, witches and daemons shouldn’t be friends. But Diana and Matthew are going to cross that line…


But what is interesting about me relistening to A Discovery of Witches for the third time is not only how much I enjoyed this series more as a thirty-something compared to the first time I listened to this back in 2011 in my early twenties or a few years back in 2017 (seriously, two years ago?), but also that some of the details I disliked in my first listening doesn’t bother me as much.

For example, the amount of tea Diana drinks and red wine Matthew drinks. It seemed endless to me as a twenty-something. And at the time, I completely understood why Matthew drinks red wine, but tea? And yet, now, it never really bothered me. 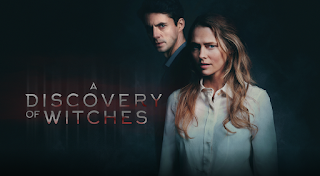 I do admit that there were times I did get frustrated over how information was given to the reader and to Diana. Now, Diana and Matthew are scholars who work at universities and they don’t apologise for how smart they are nor how hard they work (and they shouldn’t), but the amount of times a piece of information was dropped to the reader due to Diana only just remembering it or a character who we have never met before comes along and tell us. It was convenient and this happens multiply times throughout the series. And I know that Deborah is a clever storyteller because the little clues she leaves within Discovery that hints at plot point to come in Shadow of Night and Book of Life is really clever and subtle.

It’s a smarter and, at times, meaty book compared to others that I read and, out of the trilogy, this is the strongest book. When I audiobooked the whole trilogy last year, I described this book as the fantasy romance book. It sets everything up nicely and as a fantasy reader, this is the book I am most strongly attached to. Shadow of Night is the historical that asks and answers quite a few questions out of the three whereas Book of Life is the thriller that wraps everything up.

I do enjoy Discovery and I do hope to relisten or, dare I say it, actually read the novel in the future. Hopefully, this will be the first of many rereads to come in 2019!
Posted by Pewter Wolf at 08:00:00

Email ThisBlogThis!Share to TwitterShare to FacebookShare to Pinterest
Labels: A Discovery of Witches, All Souls, Audible, Audiobooks, deborah harkness, GoodRead, Headine, re3, reading, review, Year of Blood and Magic