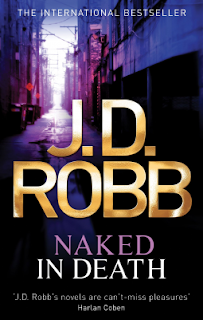 Ok, I am going to admit it. I’ve been aware of this series for a little while now, but never really acted on whether I should read it or not because it’s a long running series. And I mean, Long! It recently released the 50 (!) instalment - Golden In Death - and has no plans on stopping. The 51st - Shadows In Death - will be published this coming September. Plus, there are novellas within this series as well so VERY OVERWHELMING.

But been intrigued to try this so when I saw it was available for review to celebrate Golden In Death’s release on NetGalley, I snapped up a copy and, due to self-isolation, manage to grab my hands on an audiobook edition and listen to it while playing Animal Crossing: New Horizons (why do I get the feeling you’re judging me right now?)

It’s 2058 New York and the world has changed. Technology, the law, crimes. But for Detective Eve Dallas, she knows that murder is still murder.

When a professional sex worker (and granddaughter to Conservative Congressman) is violently murdered, Eve is put on the case as this could be the start of a serial killer. As more sex workers get murdered, her bosses and people in power want a result. Fast. Shame that the lead suspect in Eve’s investigation is one of the most wealthiest and influential men on the planet - Roarke - and that they both seem to have growing attraction to each other…


I’m surprised how well I liked this book. I can see myself very easily reading more from this series (I have one or two books on my kindle for review - one of them is Golden In Death). It’s an easy read. I feel it’s more a romance suspense novel set in the future rather than a crime/thriller, which makes sense as, from the little research I’ve done, it’s rumoured that this was meant to be a trilogy focusing on the main romance between Eve and Roake, hence why their relationship is a little more at the forefront.

Now, before I go any further, I want to stress that this book was first published in 1995, so suffers hugely from “Product of Its Time” syndrome. And that is this book's BIGGEST issue in a nutshell. 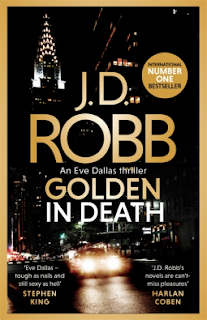 It hasn’t aged well. The technology in the book/series feels very dated, but that I will let slide. But how this book tackles the issue of sex work and historic child sexual abuse is a bit… er… not handled well. It’s a bit casual and I believe this book would have been completely different in tone and pacing if written today (hence why I am curious to read Golden In Death to see if that is the case).

And because it has “Product Of Its Time” syndrome, the way the relationship between Eve and Roake is handled is problematic. Nowadays, the relationship would have written different compared to when it was first published, because their romantic scenes together are sketchy. I know some people will say “But both characters are damaged, hence why those scenes are sketchy” and I understand that up to a point, but there were times that I flinched and I don’t think the language the author used in these scenes helped. There were a few occasions the language used in these intimate love scenes as quite aggressive and maybe even on the verge of assault.

I want to say that I did like this book because the crime intrigued me and I liked these characters (Eve more than Roake), but - huge BUT here - I do see the faults with this book and I am aware of them. This book is far from perfect and I hope, as I read more up-to-date novels within this series that these issues will be addressed and handled with better care.
Posted by Pewter Wolf at 08:00:00