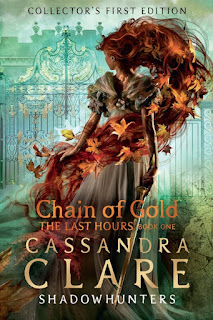 I’m not sure how to start this write-up about Chain of Gold by Cassandra Clare as I have a bit of a weird relationship with the world of Shadowhunters.

I came into this world when City of Glass was about to come out and the Mortal Instruments was a planned trilogy, and I fell quickly and hard into this world. After devouring the trilogy, I jumped into the Infernal Devices trilogy and loved that (I, like most readers, think the Infernal Devices is one of Cassandra Clare’s best). I planned to read the latter Mortal Instruments books but always lose my nerve plus I liked how City of Glass ended and didn’t want to ruin it. And, after a bit of oohing and ahhinh, I read the first two books in the Dark Artifices trilogy, Lady Midnight and Lord of Shadows and while I did like them and I did go out and buy the third and final book in trilogy, Queen of Air and Darkness, but I never felt a need to read them. There was no real pull to finish that trilogy.

And then I have the drama of getting the damn thing. So, after ooh-ing and ahh-ing, I preordered a physical copy via one well-known online bookseller, which promised to get my copy sent to me on the day of release. Wasn’t in a rush to read it at the time, but ok. Was cool with that. So, on day of release, got an email at ten o’clock in morning that book won’t be dispatched today and my physical copy wouldn’t get to me between end of March or late May. Now, seeing as I know people got their copy from other online and physical retailers ok, I knew this wasn’t the publisher’s fault so I made a complaint. A long complaint. After an hour raising questions and pointing out one or two things, I was told they were going to look into why physical copies are being delayed and will try and push my order up. In the meanwhile, was given the eBook version for free. Several days later, was contacted back and said my physical copy would be with me by end of the day.

Cordelia Carstairs and her brother are Shadowhunters, training to battle demons. When their family comes to 1903 London, Cordelia is throw into glittering ballrooms and supernatural salon and encounter childhood friends James and Lucie Herondale and their friends, who call themselves the Merry Thieves. When demons attack Shadowhunters in the middle of day, Cordelia and her new friends and family find themselves trapped in London, trying to figure out what is happening and, all the while, keeping their hearts protected as love can cut deeper than any blade…


This book took me quite a while to read. About three weeks. It would have been longer but due to Corona and self-isolation, shorter reading time (though Animal Crossing and Ring Fit Adventure called to me during this time!). So… how do I feel about this?

I don’t know. I’m a little torn over it.

However, I have problems. Like I said a sentence or two bad, I liked the plot, but the plot isn’t perfect. There are too many characters and it’s very confusing for the first few hundred pages. One or two character merged together and I had to remind myself they were two separate characters and I had to always check if they were related or not as I kept getting so confused. Plus, there are one or two characters I suspect I was meant to care about and, honestly, I didn’t. In fact, there’s one character I suspect I was meant to feel sorry for but, actually, I ended up hating her and can see her becoming a villain in the later books. And because of the amount of characters, the book felt too longer. She could still have this wealth of characters, and yet streamline the book a little. And this is something I notice I have issue with when I read her books of late… I love the diversity of her characters (all her series have good reputation) and the complexity of them, but the books are a fraction too long and, if the the previous series are anything to go back, the next two books are going to get longer.

I wonder if I struggled at times with this due to the fact this felt more New Adult than YA. I always seem to struggle with New Adult fiction and I am not sure why. There were several storylines - drinking/alcoholism, gender politics, LGBT - that felt a little older in tone to what I normally see in YA.

While this might not be a standout in the Shadowhunter series, I do see that this book is setting this trilogy’s overarching storylines neatly and I am intrigued to see where this is going to go. But I wonder if I have, maybe, outgrown this series and am ready to try more adult, more dark urban fantasy series…
Posted by Pewter Wolf at 08:00:00