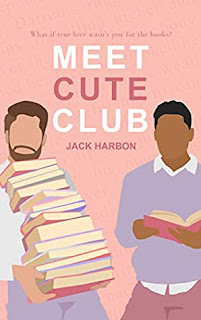 I was very lucky to have been gifted some books and ebooks from Amazon Wishlist thread on Twitter due to COVID-19 self-isolation and days feeling very low about this world situation back in March/April (though the situation now… like I said a while back, can we cancel 2020?). And I decided that I would like to read some over the summer. So, after reading The Ballad of Songbirds and Snakes and feeling very meh about it and the world/weather at the moment, I felt I needed something light and fluffy before I go onto my next real read of the first book in the Lockwood and Co series by Jonathan Stroud. So, the ebook gifted by Faye from A Daydreamer’s Thoughts called to me and so, I started Meet Cute Club.

Jordan Collins doesn’t need a man. Why would he? He’s happy reading the next release of his favourite romance novelist and his romance book club. But members are slowly leaving and so, when a new employee from his local bookshop, Rex, wants to join, Jordan can’t exactly say no. Even though the first and only time they met, Rex made fun of his “grandma” reads and Rex got under Jordan’s skin in a way no one has before.

As the two begin to team up and save the Meet Cute Club, both Jordan and Rex realise that they judged each other wrong - What’s the saying? Never judge a book by its cover? - and the two fall for each other. But they both know real life isn’t a romantic novel and not everyone will get a happy ever after. So, will they?


It’s a cute read. I keep coming back to the word cute when I think of this. It’s a cute OwnVoice M/M romance (new adult, maybe?). It’s cute and it does what a romance should do. It’s cute.

But I can’t seem to get beyond that. This isn’t a bad thing - in the current climate, we need light reads and we need to do more OwnVoices - but it doesn’t hit those sweet notes that I like to see in romance. I wonder if this is because the story is quite short and the writing was a little unpolished. The romance felt rushed at times and the writing, sometimes, is a bit clunky and needs a tad refining. If the story was a little longer and the writing a little more polished, it would have done it for me.

This is a cute, fun summery romance and, I think this is the first in a series so I am going to read book 2, but I want more from book 2 if/when it comes out.
Posted by Pewter Wolf at 08:00:00