Yes, I know this was announced last Thursday, but couldn't get on my laptop till this afternoon and, though I don't like publishing any posts on the Pewter Wolf Reads at the weekend, I broke it yesterday so let me be a rebel without a bookish cause today! 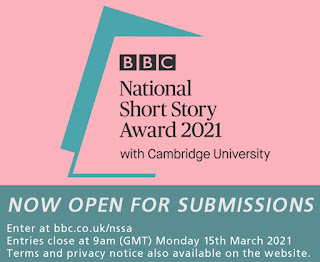 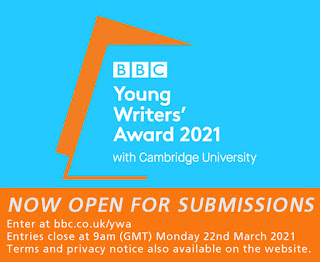 The BBC National Short Story Award with Cambridge University (NSSA) and BBC Young Writers’ Award with Cambridge University (YWA) open for submissions today at 9am with novelist and former Radio 4 Commissioning Editor for Arts James Runcie chairing the judging panel for the BBC NSSA, an award that has enriched both the careers of writers and the wider literary landscape since its launch sixteen years ago.

“I am so delighted to chair the 2021 BBC National Short Story Awards. We need imaginative alternatives in these dark times: stories that question and surprise and open up new worlds. They can be short or long. They can take place in the past, present, future, or even all three at once. They can be set in a nutshell or in infinite space. But what I think we’ll be looking for is uniqueness of vision, a distinctive tone, curiosity, intrigue, surprise: an invitation to the reader’s imagination. I can’t wait to get started.”

Chair of the BBC Young Writers’ Award with Cambridge University (YWA) is BBC Radio 1 Presenter Katie Thistleton. She chairs the judging panel for the teenage award for the fourth time as it opens for submissions for the seventh year. Katie is a writer and the co-host of Radio 1’s Life Hacks and The Official Chart: First Look on Radio 1. The BBC Young Writers’ Award is open to writers between the ages of 14-18 years.

“I’m really looking forward to chairing the BBC Young Writers’ Award with Cambridge University again for 2021. As a keen writer myself, and someone who loved entering writing competitions when I was younger, I know how important and exciting this opportunity is. I always love reading the submissions and gaining a perspective on what young people are thinking and feeling at the time and, I imagine, the different world we have been living in recently will be reflected in this year’s stories. This is certainly a unique time, so I have no doubt we’re going to discover some equally new and unique, young voices.”

The BBC National Short Story Award is one of the most prestigious for a single short story, with the winning author receiving £15,000, and four further shortlisted authors £600 each. The stories are broadcast on Radio 4 and published in an anthology by Comma Press. The 2020 winner of the BBC National Short Story Award was Sarah Hall for ‘The Grotesques’, a timeless and unsettling story set against a backdrop of privilege and inequality in a university town. This was the second win for Hall who also won the prize in 2013. Previous alumni of the award include Lionel Shriver, Zadie Smith, Hilary Mantel, Jon McGregor, Ingrid Persaud, Cynan Jones and Jo Lloyd.

The writers shortlisted for the BBC Young Writers’ Award have their stories narrated by an actor and recorded for a BBC podcast and published in an anthology. The winner of the 2020 BBC Young Writers’ Award was Lottie Mills for her story inspired by her experience of disability, ‘The Changeling.’ Both winning stories are available to listen to on BBC Sounds.

Di Speirs, Editor of Books at BBC Radio and judge of the BBC National Short Story Award since its launch, says:
“After a year in which fiction has offered constant balm in troubled times, I am delighted to be calling for submissions to the sixteenth BBC National Short Story Award and the seventh BBC Young Writers’ Award, both with Cambridge University, and very curious to see how writers, experienced and new, respond to the world this year. Last year saw such wonderful variety in tone, style, subject and approach, underlining how strong short story writing is in the UK currently; at a time when we need fiction so much but often struggle to concentrate on it, I can’t wait to be transported, moved, amused, shaken or stirred by this year’s entries.”

This is the first year of a new three-year partnership with Cambridge University, now also including the Fitzwilliam Museum.

“The University of Cambridge is delighted to be collaborating with the BBC again on these awards, and to support and nurture both new and established short-story writers. Stories are at the heart of our shared human experience, and Cambridge's Faculty of English, Institute of Continuing Education, the University Library and Fitzwilliam Museum all have a special interest in how this dynamic form of fiction responds to a changing world. The standard set by writers entering these competitions is always impressive, and as we embark on the fourth year of our involvement at a time of such upheaval and distress, we look forward again to discovering work which will offer vivid new ways of understanding ourselves, and our contemporary moment.”