Should We Play With Fire? 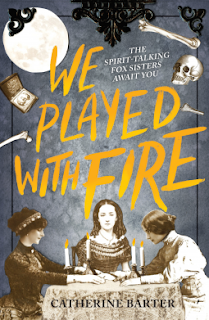 I have an extract for you guys as part of the We Played with Fire blog tour (is this my first of 2021? Nope, my second. Sorry, 2020 has turned my blogging brain to slush)! And oh, you are going to really enjoy this (well, I hope you guys do!)
Inspired by the true story of the Fox Sisters in the nineteenth century America, We Played With Fire by Catherine Barter follows the Fox Sisters, Maggie and Kate, as they and their family are spending the winter in a remote farmhouse upstate. They don't believe Maggie has seen impossible things and, bored and angry, she and Kate start to play tricks on each other and the rest of the family: knocking the floorboards above their parents' bedroom, cracking their toes under the table, telling tales of noises in the night.
And that's all fun... till the house stars making noises of its own. Neither Maggie and Kate can explain who or what are making the noises. But... is there something - no, someone - in the house, trying to speak to them...
A historical ghost story? SIGN ME UP!
Ok, so, before I give you the extract to devour, I would like to thank Robert for Andersen for asking if I wanted to be involved in the tour! If you want any info of We Played With Fire, you can visit the author's, Catherine Barter, at her Twitter - @okayjane. You can, also, check out Andersen Press for more details.
Also, we have a virtual book launch happening in the next few days. On this coming Thursday (7th February 2021), Catherine will be having a virtual book launch via Zoom at 7pm (UK Time). And it's free so you can pop in and say hi! The link you'll need if you want to pop along is https://housmans.com/wpwf-launch/!
Now, ONTO THE EXTRACT!!!

It started at lunch. They were all in silence, eating soup, when the table gave a sudden jerk. Maggie thought Kate had done it; she looked at her, but Kate’s expression was startled.

Their father pushed back his chair, got to his knees to look under the table. Stood back up and stayed standing, for a moment, as if he had something to say. But they were all very quiet: just four bodies breathing, waiting for something else.

The moment he sat back down, two sharp cracks came from under the table on Kate’s side.

‘Something’s here,’ her mother whispered, a spoonful of hot soup held halfway between the bowl and her mouth.

And they did, obediently, all listen.

And then two sharp cracks from the ceiling above their heads.

Something ran cold through Maggie’s blood. Pumped straight from her heart to the ends of her fingertips.

Kate’s face was turned up, toward the ceiling, attentive and alert, a shimmer of something around her, like dust caught in the sunlight. ‘Hello?’ she said, and the two sharp cracks sounded again. Their mother dropped her spoon and pushed her own chair back.

A man’s voice said, Here you are. But he said it inside Maggie’s own head, and nobody else heard. Here you are.

Kate, very slowly, as if pulled by an invisible string, was rising from her chair.

Are you doing this? Maggie thought, and tried to send the thought direct to Kate’s mind. And perhaps she did, because Kate flicked her dark eyes in Maggie’s direction, gave her a knowing look that Maggie didn’t understand, and then looked back at the ceiling.

‘We’re listening,’ said Kate, but her father grabbed her arm roughly and pulled her back down to her chair.

‘John,’ said their mother, reaching a hand toward him, and John pulled away from Kate and held his arms up, and Maggie wondered if he had been about to hit her, his youngest daughter.

He turned away from them, and went up the stairs, and they heard his footsteps, heavy and creaking, cross their bedroom floor, turn and walk back again, and then stop.

And after lunch, when their father went back into town andtheir mother went to visit with neighbors, Maggie found Kate with her nose pressed against their bedroom window, looking out at the sky and the snow-capped trees. Maggie sat on the bed, waited a few moments, and said: ‘What’s happening?’

Kate took a while to answer. She turned, eventually, and came and sat at the other end of the bed. She bit her lip and twisted one of her braids around her hand.

There was a shifting sound above them, from the roof, but it was only snow, breaking apart and sliding down.

Maggie knew a man when they’d lived upstate who’d been killed by snow falling from his roof. She thought about him sometimes.