It's the last name on this list - Polis Loizou - that I am thrilled to have on The Pewter Wolf Reads as I have followed his Twitter for a few months now and couldn't be more thrilled and excited when the Sarah-Louise from Inkandscent emailed and wondered if I would like Polis on the blog.
I won't tell you about Polis's story in this collection - Pixalion - as Polis does a much better job explaining it than I would, but I think you are going to find his guest post (and, hopefully, his story and this collection) gripping.
Now, before I hand you over to Polis, some blog house-keeping. I want to thank Polis for finding time to write this post (I know he is super busy with his sophomore novel, The Way It Breaks, just been released and his one-man show, Mr Fox, about to hit the Brixton Fridge) and I, also, want to thank everyone at Inkandscent (mainly Nathan and Sarah-Louise) who had to deal with my out-of-the-blue email back in April 2021, where I was basically "Hi, you don't know me, but would you consider..."
Oh, links! If you want to know more info on Polis or just fancy saying hi, you can pop onto his LinkTree of linktr.ee/PolisLoizou and all the links you need are there or drop him a hello tweet on @PolisLoizou. Or, if you want more info on Mainstream, you can check out Inkandescent's website (inkandescent.co.uk) or pop them a tweet at @InkandescentUK.
Ok, I think that's everything, so, POLIS! OVER TO YOU!!!

Polis Loizou on the social-media interactions that shaped his short story, Pixmalion. The story appears in Inkandescent’s Mainstream anthology, a wonderful initiative to highlight tales by writers from the margins.

I grew up on social media. Ever since those Windows 95 days, when the Internet was a thrilling gateway to discovering new interests and connecting with people across the globe, I’ve relished existing in my two forms: corporeal and digital. Not that these have been wildly differing personas for me; while others might prefer to obscure themselves with faceless avatars and usernames, I’ve been happy to present myself as me.

Well, a version of me. Naturally, we all edit our lives for the Socials, even the over-sharers. If we post a selfie, we don’t post its many outtakes. Though I’ve been advised not to, I openly discuss my failures – the countless rejections and creative disappointments – but I still restrain myself from mistaking Twitter for a therapist. I’ve learned to post online about little annoyances in a light-hearted manner, even if they made me swear like a Scorsese movie ‘irl’. In this apparently ever-more-divided world, I’ve increasingly become conscious of how I come across, in order to attract likeminded people into my digital home and keep those I’m unwilling to entertain at bay. My digital home comes with digital gates.

While some people use the distance of the screen to unleash their inner troll, I’ve recently come to use it for other forms of expression: my body, my sexuality. I’m more openly bisexual online – perhaps unsurprisingly, since us LGBT+ people can never be sure who we’re ‘safe’ with in the physical world. This has led to my connecting with many members of the community, on both Twitter and Instagram (I smugly regard Facebook as the Conservative Suburbanite realm, so have steered clear since 2016). As such, I have more LGBT+ ‘friends’ online than I ever had offline, and on the whole it’s been wonderful. Some are geeky, some are kinky, some are creative, some are all those things and more.

Many of my gay mutuals post selfies, often exposing their bodies. They’re all stunning, which is just unfair, and it cheers me up to see queer people so proudly owning themselves. It’s become a running gag for a ‘Twitter Gay’ to post a caption along the lines of ‘New glasses!’ to accompany a mirror-selfie of a gym-built man in a jockstrap. ‘Enjoying my morning coffee’ over a POV shot of a mug next to a giant erection. The polar opposite of the shame I was made to feel by homophobic and biphobic rhetoric in my youth. Good for them.

Though I’ll never be bold enough to post that much of myself, I have begun to post more selfies. I’ve tried to get comfortable with presenting my body online as a way to help me feel more at ease with it offline. Having long been bullied for my appearance, I still struggle with self-image issues. I will only remove my shirt in front of people other than my husband if I’m at the beach, i.e. once every couple of years when I’m back in my motherland of Cyprus. But in recent months I made the bold (for me) first move to post a shirtless pic online. I’ve since posted intermittent selfies in vests, even flexing my biceps on occasion like some fairground strongman.

I don’t know what I was expecting – shock? Revulsion? But some people enjoyed these pictures. Men I’d never met were sending DMs; a number of dick pics, along with the demand that I reciprocate. At first I was nervously flattered and would decline politely. ‘Your husband doesn’t own your body,’ one man said. I laughed it off. It took me a while to think: No, stranger, but neither do you. 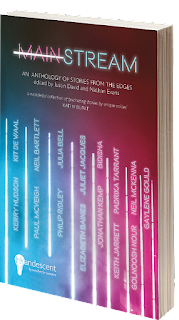 I appreciate my privilege; women only need to exist in order to receive unsolicited dick pics and presumptuous comments from men. This was something I simply wasn’t used to, and have been learning to navigate. My exploration of my own realm is not an invitation for others to enter. If someone is standing in their garden, you don’t walk into their house uninvited.

So I wrote Pixmalion, a short story about personas, connection, intimacy and trust on social media which I submitted to Inkandescent’s Mainstream anthology call-out. To my surprise and joy it was accepted – how heartening that a story about someone like me, a queer Cypriot, could be published in this inclusive project. The narrator is an older gay man in Cyprus lusting after a young Greek artist who posts creative thirst-traps. Though he’s never met this man, he feels a connection to him: shared interests in folklore and mythology, along with the satisfaction of catching a reference the other has made.

It was not only inspired by my own experience of feeling ‘close’ to people I’ve never met in person, but also by a specific follower. Twenty years my senior, this man would send DMs in which he’d lust after and snipe at me in equal measure. Admirer and bully in one. He is not unique in this regard, I’m sure. But as much as I grew to dread contact from him, I couldn’t help excusing his behaviour; he was lonely, I’d tell myself, or frustrated; well-meaning but socially awkward; he thought he was joking; he thought we were closer than we were. After humouring him for a few weeks, I gradually cooled my replies. Tired of me, he unfollowed. And this stung. How dare he. What a child, what a way to treat a… what? Total stranger? We weren’t friends. But he’d also seen more of me than many lifelong friends who’ve stood close enough to touch.

I’ve made many friends online throughout my life, and now know some of them in the physical world. As in any offline relationship, an online one is based on mutual respect. You shouldn’t demand of someone else what they’re not comfortable or willing to offer. And only when they extend the offer should you put your foot in the door and step inside their house.