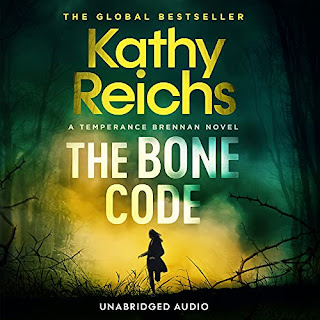 Ok, this looks like it's gonna be a mini-review type post. Not much to see, but I thought I should tell you guys that I have read this and moved on.
It has been a while since I read/audiobook a Kathy Reichs novel. I attempted A Conspiracy of Bones last year and was never in the right headspace (might try again later this year/next year) and I have been thinking of rereading some of my fave Temperance Brennan novels (just checked. According to Goodreads, the last Kathy Reichs novel I read was back in 2017 [really? Are you sure?] with Two Nights). And, of course, we have the TV the books inspired, BONES.

A storm hits South Carolina and, while driving to Isles of Palms to help out a friend, forensic anthropologist Temperance Brennan receives a call from the Charleston coroner, asking for her assistance. Two decomposed bodies have been washed ashore in medical waste container, the bodies wrapped in plastic sheeting and bound with electrical wire. This shocks Tempe as the case rings frighteningly similar to an unsolved case she and her boyfriend, Andrew Ryan, worked on over 15 years ago in Quebec. As she works to try and get the cold case reopened and see if there is a connection between to the two, the citizens of Charleston are struck by a bacterium that, at its worst, can eat human flesh. After COVID (yep, that's mentioned in here. Thought we had escaped that!), thousands panic and test themselves for a rare genetic mutation that may have rendered them vulnerable.

This is Tempe's 20th outing (20th! Can you believe it?!) and, while I dip in and out of the series since I read my first Tempe novel, Bones to Ashes, I still hugely enjoyed myself. I really like Tempe's dry humour, how each case feels fresh and not repetitive and the pace/tension is solid throughout. Plus, unlike Patricia Cornwell's Kay Scarpetta, Tempe is flawed and accepts that she might not always be right.

Now, this isn't going to be everyone's cup of tea. I acknowledge that and accept that, but I thorough enjoy this series and these characters and I am making plans to revisit some of Tempe's previous cases and audiobook one or two I haven't read.
Posted by Pewter Wolf at 08:00:00