So, my SpoOOoky Halloween reading isn't exactly going to plan. Come on, did we really think it would? I did start (then stopped for one reason or another) Malice by Heather Walter (I think I might save for this for when I go on a blog break next [Christmas/New Year?]). And with me still finding my feet with new job (when we do stop calling a new job new, exactly?) and my reading/audiobooking taking a bit of a nosedive/spiral, I thought I would throw these two VERY different mini-reviews at you!
The first is one I didn't think I was going to put up on here. It's on my Goodreads and I said, in the very first line "Not sure if I will review this on my bookish blog as I feel the same way about this as I have with the other instalments of..." this series. The series in question: Phryne Fisher Mysteries. Oh yes, I'm diving back into this one and I did the fourth in the series, Death at Victoria Dock. It's been a while since I did a Miss Fisher after, over the course of last few years, dipping toe into this world with (in this order) Murder on the Ballarat Train (book 3), Flying Too High (book 2) and The Green Mill Murder (book 5) (and let's not forget I started/DNFed the first book in the series, Cocaine Blues, though I do wonder if I should try this again as it's been a while and I get Phryne now.) 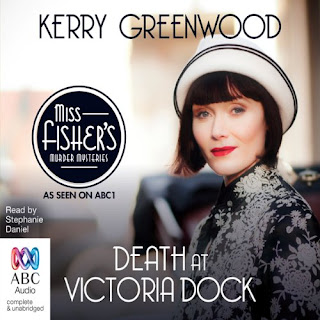 Title And Author: Death At Victoria Dock by Kerry Greenwood
Publisher: Constable
Bought, Borrowed or Gifted: Audiobook’s borrowed from local library via BorrowBox app
This is a nice, easy, almost cosy (I feel that calling this a cosy Australian crime is a little wrong as, while this has that cosiness to it, it has quite dark themes) Australian crime and I speaking time with Phryne, Dot and the other characters in this series.
While I might not rush back to this one (and I am beginning to see a pattern in these books: two mysteries happen side-by-side, Phryne gets self in danger, sleeps with beautiful men [this is one of my favourite elements. Most crimes I read are quite prude-is when it comes to sex, but Phryne is open minded and enjoys sex. Plus, all sex scenes happen to be off page so isn't too scandalous!], and she solves both cases in the same day), I do enjoy Phryne so I do think I am going to dip in and out of this series.
I'm not sure where to go next. I keep looking at the later installments, but something tells me I should stick closer to the titles I have read, such as Ruddy Gore, Urn Burial, Raisins and Almonds and/or Blood and Circuses. But am intrigued over Phryne's 21st outing, Death in Daylesford...
While driving her car, Phryne Fisher finds herself getting shot at. While the mystery shooters flee, Phryne discovers a man who die in her arms. He has a strange tattoo on his shoulder and Phryne is determined to bring the killers to justice. But as she begins to investigates, she discovers a world of bank robbery, tattoo palours, spiritualists and Anarchists. While this is happening, a young girl goes missing and her rich father begs Phryne to help...
From Australian crime, let's change the pace with middle-grade/pre-YA with The House in the Woods, the first book in the Ghosthunter Chronicles by Yvette Fielding. Now, most of us in the UK know of Yvette Fielding. Youngest ever present of BBC's Blue Peter, she went on to know as the UK's First Lady of British Television Ghost Hunting via her TV shows such as Most Haunted. 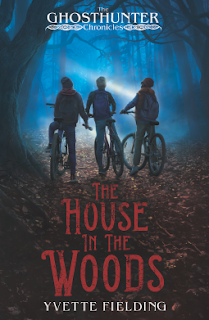 Title And Author: The House in the Woods by Yvette Fielding
Publisher: Andersen Press
Bought, Borrowed or Gifted: eProof gifted by UK publisher via NetGalley in exchange for honest review/reaction.
For those curious, this is the first book in a middle-grade/clean pre-YA following three young teens - Eve, Clovis and Tom - who decide that this Halloween will be spooky. They plan to go to a haunted house, in the middle of the woods, with a Ouija board, without telling their parents or guardians. And you can guess what happened next, can't you?

I don't know what I was expecting. I was expecting something because I picked this as it's October, Halloween is round the corner and it's so rare that I read spooky books during October and Halloween. And I knew going into this that this book couldn't be too scary due to its target audience. I completely get that.

So, why did I come away from this feeling "Well, that was a fun, easy read. A bit meh, but still, a nice easy read"?

Nothing wrong with this. I hoovered this within a few days while I was on holiday. Could have very easily read it on the plane to Edinburgh (aka one sitting) , but I felt a little underwhelmed. Everything felt a tad flat and not fleshed out - I know, first book in a series, but still, it wasn't what I was hoping for.

Not a bad start to a series to creep out older middle-grade/young clean YA readers, but it could have gone a tad further... I wanted more for this and it didn't delivered what I hoped, sadly.
Posted by Pewter Wolf at 07:30:00