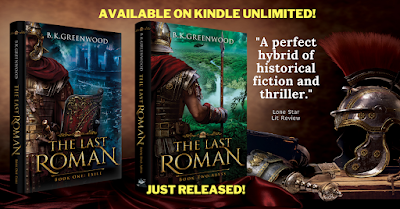 Oh my! We have something different on here! Yes, I know, it's historical so very outside my wheelhouse, but when Erik from Breakeven Books messaged and asked if I wanted to be involved in this, I thought I would dive in and try something new!
The Last Roman series By RK Greenwood follows imperial officer Marcus Sempronius Gracchus from the 9th Roman Legion into battle against a fierce barbarian rival. It's a battle he won't survive.

So, when he awakens three days later, clawing his way from a shallow grave, Marcus must face the reality of his new existence. He cannot be killed - but that won't stop him from dying time and again over the next 2,000 years to try. But while he's doing that, others like Marcus plan to bring the world crashing to its knees...
I have a sneak peek into the first book in the series, Exile. The second in the series, Abyss, is out now and the third will be out early next year (Spring, I believe. Don't hold me to that). If you want more info on the series, you can pop over to bkgreenwood.com and have a look round.
Now, shall I just give you the excerpt now? I think I shall...

Marcus moved along the faltering line and soon encountered the largest man he had ever seen, hacking his way through the thinning ranks. A legionnaire tried to bar his path, but the ogre swung his massive blade, catching the soldier just below his jaw. A crimson arc of blood sprayed from the fatal wound, much of it splattering across Marcus' face and chest. Behind the giant, more barbarians advanced to exploit the breach.

Marcus grabbed the shield of a fallen soldier and rushed the behemoth, who welcomed the attack with a vicious blow. The force drove Marcus to one knee and nearly knocked him unconscious. Marcus raised the shield to protect his head and shoulders and thrust his sword upward. The point struck metal, so he shoved it harder until he felt the blade dig into the soft underside of a trunk-like arm. Marcus could hear the giant's howl above the din of the battle and knew that retribution was near. Another thunderous blast crashed into the shield, the metal and banded leather splintering from the attack. The next blow would rip Marcus asunder. 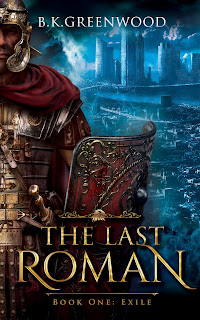 Desperate, Marcus hastily covered his head with the remains of his ruined shield. He mustered all his strength and drove forward into the beast. The shield thudded against his waist, eliciting an angry grunt. Marcus reached around the barbarian's leg with the blade of his sword, finding the naked thigh. Thought never meant as a weapon for slashing, the edge of his sword was still razor-sharp. He drew it across the giant's hamstring, cutting through flesh and sinew as Marcus pushed forward. The Suebi screamed in agony as the two men crumpled to the ground. The barbarian smashed the hilt of his sword into Marcus's head, knocking off his helmet. The world spun as Marcus stood and staggered away. Blood flowed down his face, blurring his vision. His opponent, writhing in pain, screamed at him.

Marcus heard several men shout, "The giant is down!"

A loud cheer erupted from the Romans, but that only encouraged the other barbarians. Marcus raised his sword in time to block another attack, but the force knocked him to the ground. The barbarian raised his sword to strike a death blow when Gaius appeared out of nowhere and ran him through. With great effort, Marcus regained his footing, lumbering forward to rejoin the melee. He lost his balance again and had to lean on his sword to keep from falling. As he stood watching the raging battle, a sharp pain shot through his side.

He looked down and saw the blade of the stricken giant sliding beneath his armor. The barbarian was sitting on his haunches, trying to stab him again. Marcus summoned his remaining strength and, swinging for the neck, felt the cold steel bite into flesh, then bone. A low gurgle escaped the laceration as the colossal body slumped forward, and the barbarian's head fell to the ground.

Marcus dropped the sword, trying in vain to reach his wound and stem the flow of blood. His breath grew labored, and he coughed, a coppery trace spilling into his mouth. Marcus slipped to the ground, his gaze fixed on the gray, sunless sky.

Moments later, Gaius knelt beside him. He tried to undo the bloody clasp of his armor, but Marcus pushed his hand away. Their eyes met.

"The men did good," Marcus said.

Marcus continued, but it was inaudible.

Gaius leaned over, and Marcus whispered, "Tell my wife—" He coughed up specks of blood onto Gaius's soiled cheek. "I'm so sorry…" Marcus swallowed back the warm fluid rising in his throat, "sorry I left her."

Marcus nodded as a white horse arrived, the rider dismounting. Somewhere in the distance, he could hear the general's voice.

The old centurion did not reply, but the answer was written on his troubled face. Quintus knelt to the ground.

"Marcus, your actions have saved the day. I plan on submitting your name to the Senate…"

Quintus paused when their eyes met, then shifted to the pool of blood gathering around them. Marcus looked beyond him to the sky above as the general spoke of honor rolls and victory marches. There was a shimmer in the cloud that resembled a bird. He tried to focus on the form as it grew closer, but he could not keep his eyes open. As he slipped into the darkness, he thought of his wife and the fact that he would never see her again.