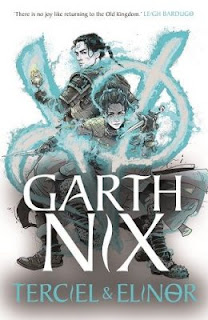 AT LAST! IT'S TIME FOR A NEW OLD KINGDOM BOOK! ANYONE ELSE EXCITED? ... no? Just me then.

Title And Author: Terciel and Elinor by Garth Nix
Publisher: Hot Key Books
Bought, Borrowed or Gifted: Copy gifted by UK publisher in exchange of honest review/reaction. I, also, preordered the Forbidden Planet special edition
If you have followed me for a little while, you know that I adore this series. I reread via audiobook the series in summer 2020 (Covid 19 lockdown burnout and a terrible case of reading slump) and it was a wonderful experience - even Clariel, a book I'm not the biggest fan of, I went "This is lovely. I missed this world." Plus, I think about the lead, Clariel, quite often. So, when it was announced that we were getting another instalment in this world, you can guess how excited I was? And the fact that it was a prequel to the first book in the series, Sabriel, looking at her parents made me more excited.
Now, before I go further and explain the book, we get most of the information about Sabriel's parents in the prologue of Sabriel so we know where their story ends. But we don't know how they met and how the relationship evolved and that's what this book is about: her parents meeting.

Ok, I need to talk the story, don't I? In the Old Kingdom, where Charter Magic and Free Magic exists, 18 year old Terciel is the Abhorsen-In-Waiting. A necromancer to bind the Dead down and lay them to rest. Soon, he will be the Abhorsen and soon, he will have to face the Dead and, maybe, Greater Dead. But when he is sent south into the Ancelstierre, he doesn't realise the ploy he's walking into...

In Ancelstierre, where magic usually doesn't work (unless close to the Old Kingdom or the winds blowing from the north), 19 year old Elinor lives a seduced life. Her closest friends are her governess and a former circus performer. Her mother lies in bed, close to death. But in a space of a night, everything she knows is burnt, killed or ripped away from her as a ploy from an ancient enemy brings Terciel into her life and the truth of her connection to the Old Kingdom is revealed.

And still, the enemy is waiting, buying their time...

Now, I love this series. Don't get me wrong. This is one of my favourite fantasy series and, normally, I can devour each instalment quite quickly. But this... this took me a month to read. Mainly because of time (some days, I could only spare about five minutes before rushing to work), but also because this wasn't what I was expecting. Now, I like when books take me in directions I'm not expecting. It's just... how can I explain this in a way that makes sense?

Ok, I think I got it. This is a book about how the series's main hero's parents met, correct? And how the Big Bad of this book (and of Sabriel, FYI) is delayed, yes? So... why does the majority of this book have our main leads apart with no interaction? I mean, the character first meet on page 50(ish) then apart way on part 82. Then they don't meet up again till around page 288. That is 206 pages of them apart (remember, this book is around 409 pages long, minus Author's Note and Acknowledgement, so over half the book is these two characters apart) and I get why this had to happen, but boy, there were moments when it dragged. 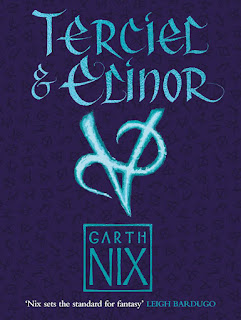 I think my main issue with this is the same as I have with Clariel on my first reading. Which is that it feels slightly disjointed from the rest of the Old Kingdom series. You know it fits the series and it does, but at the same time, it feels even-so-slightly off kilter, as if the story of these two teens finding themselves and their place in the world isn't strong enough to hold the story.

Maybe this is me overhyping this book in my head (which I know I have up to a point as this was one of my most anticipated reads of 2021!). Maybe, once things are more settled and I reread this (which I will do next year or in 2022), I will read it and I will click with it.

I'm still a huge lover of this series and if Garth Nix writes another instalment, I will preorder it so fast. I would be hugely curious to see where he goes (I would love to know who the first Abhorsen is and how they became the Abhorsen), but I would be happy if this is the last instalment in the Old Kingdom as I don't want this series I love to outstay its welcome.
Posted by Pewter Wolf at 07:30:00