GoodRead - No Rest For The Dead (Unabridged Audiobook) 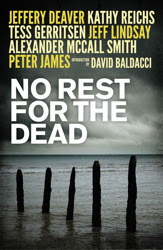 As you guys know, I am a bit of crime nut. I do love reading or audiobook a good murder mystery so No Rest For The Dead is probably a biggie for all you other crime fans out there. Why, I hear you ask? Because 26 crime and thriller authors - including Kathy Reichs, Tess Gerritsen, Jeffery Deaver, Alexander McCall Smith & R L Stine to name a few, with an introduction from David Baldacci - all helped writing this, each writing a chapter or two each. And with the audiobook version, you had six readers, in which made the story feel more it was told from several people, which I like.

The story starts when Rosemary Thomas was executed in the state of California for the murder of her husband, Christopher Thomas. Chistopher was discovered inside an Iron Maiden, a torture device that was on loan from Germary to the San Francisco's Museum of Fine Art, where both Thomas and Rosemary worked at. All the evidence pointed to Rosemary, even though she claimed she was innocent. Ten years later, a memorial is being held on the ten year anniversay of Rosemary's execuation. But what happens if Rosemary was innocent? What happened if an innocent woman was executed? But if she was, then who killed Christopher Thomas?

Now, should I talk about the story, the authors or the readers? Where should I begin?

The story. The story in itself is fast and will have the reader on the edge of their seats guessing and double-guessing. I never saw the end coming but I suspect that some of you crime die-hards out there might. I think most, if not all of you, will get it at the same time I did (dare I say which author wrote the chapter? No. I better not. I don’t want to ruin the fun!).

But what makes this story so different from the others out there is the fact that you get 26 authors involved in this, each bring their own style to the story. Some chapters are more emotional, others more action, others more technically than the rest of the book, but you can hear the voices of each crime writer. There are a few chapters where the chapter doesn't gel with the story, but you forgive that as each chapter has been written by a different author. And with the audiobook version, you have six readers so with this, you still get the feel that this is the same story, but being told from several people's point of views, which makes the story feel more textured.

Now, I can imagine all you crime die-hards out there rushing out to grab this book/audiobook as it has the crème de la crème (or the crime de la crime) of writers out there - I mean, I got very excited when listening to Tess Gerristen and Kathy Reichs chapters (as they are my fave crime authors). But there will be a few of you going "Huh? What is he/she doing in?". Yeah, I had that, with Alexander McCall Smith and R L Stine. Now, Alexander McCall Smith, I can understand as he does crime (though some of you would call his work "gentle crime") but R L Stine? Bestselling author of the teen series, Goosebumps? What is he doing there? His chapters (only two, actually) are short and very different from the rest of the story - but, when you read/listen to his chapters, it makes perfect sense. But saying that, most of the chapters are told in third person but there are a few chapters told from the characters.

All in all, crime fans will love this. Not entirely certain I like the final two/three chapters (this includes the diary entry - which shouldn't count as a chapter, but I do), but with the list of well-loved and well-respected crime writers help writing this story, this is a must for crime fans!