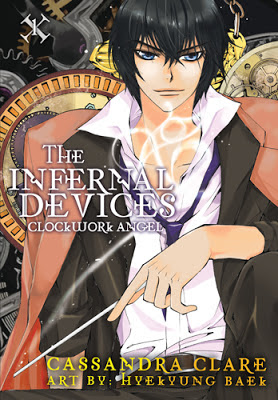 I heard rumours that there will be graphic novels of Cassandra Clare's Mortal Instruments coming out (perfect tie in for the upcoming movie that's coming out next year). But it was only recently that I realised that Cassandra's Infernal Devices series were being turned into manga (I believe it was Mundie Moms who filled me in so thank you). So, imagine my surprise when I got a parcel from Atom & Orbit and the manga Clockwork Angel was in it with other goodies. I grabbed this and read quickly.

It is the same plot as Clockwork Angel (my review of this is here). But, for those who aren't familiar with this series, this is what you should know. In Victorian London, American Tessa Gray comes to visit her brother, Nate. But instead of meeting him, she meets the Dark Sisters. Who then take her hostage. So, when she is rescued by Will, she finds herself in a world of Shadowhunters and Downworlders and then, soon afterwards, she finds herself between two best friends. With her heart torn in two directions, Tessa finds out she's more connected to this new world than she first thought...

I don't really want to talk about the story (as I have reviewed the novel before), but I am very pleased how the novel was adapted to become a manga. And for good reason as it was adapted by the author herself. This helped explained how the book kept loyal to the story and kept the essence. This is very important in adaptations, in any form. If you lose the essence of what made a story great in its adaptation, it feels... wrong. Does that make sense?

The art. Now that I do want to talk about. I liked the art, done by (according to the press release) "the phenomenal manga artist HyeKyung Baek". But... yes, I have buts. First of all, Henry. Why was he done like that? WHY?! That's a small thing, as is the "Do all men in manga look similar?"

The main "But" I have with this is the chemistry. This is meant to be a love story, and while the manga did the supernatural side brilliantly, the chemistry was lacking. If this was stretched over several issues, then this would be done and we would, probably, be sick of it. But, as this was only one volume, it felt a little rushed. Maybe I'm putting too much focus on that as Cassandra tackled this brilliantly in the novel, but... I didn't carry over very well.

I think I may be a little harsh. I really enjoyed it (and it was a fast read. Took a few days to read!) and I am itching to see what the manga version of Clockwork Prince is like! And, this is the perfect "Tie Me Over" till the Infernal Devices finale, Clockwork Princess, comes out. I can NOT wait!

PS - just realised that on the cover, Will is doing the Fearless Rune. Now, am such that Clary created that in City in Ashes. She created and Alec almost told his parents that he was gay. Or am I misremembering? Let me know guys!
Posted by Pewter Wolf at 07:00:00