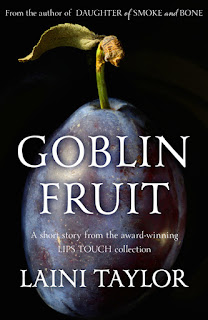 I'm pretty sure most of you have read this short story. It's one story in the short story collection, Lips Touch,  by Laini Taylor (author of Daughter of Smoke and Bone and its sequel, Days of Blood and Starlight) which has been out in most countries for ages and yet, we in the UK won't get till next year. But, as a taster, Hodder Books has released Goblin Fruit as an eNovella, just to wet our appetites (pardon the pun) and, also, to get us over the shock of Days of Blood and Starlight.

Kizzy wants it all. To look prettier. To be girlfriend of the hot guy in school. To not be involved in her weird family. She wants it all so badly, half her soul is hanging out of her. And this drives goblins crazy. They feed on souls and they want Kizzy's if she's not careful...

I'm trying to figure out how I feel about this story. While I am excited over more Laini, this story was ok. Just ok. I feel like I'm saying that alot lately, but this was a fast fun read where I was clicking at my Kindle, needing to know how it ended and where the story was going. Afterwards, though... I feel like it was a bit of a candy floss read. Fun and addicted while reading, but once finished, you realise that there wasn't any substance to it...

Maybe I'm being a bit harse. It wouldn't be the first time. I mean, have you guys not read my review/instant reactions to Daughter of Smoke and Bone? But this does wet my appetite for Lip Touch so I will be waiting for Hodder to reveal more info on this in the new year...