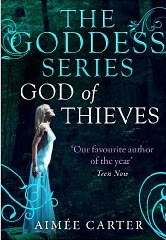 Let's confuse you guys. If you're a fan of Aimee Carter's Goddess Test series, you're probably awaiting the collection of short stories, The Goddess Legacy, to fill the gap before the final book in the series, The Goddess Inheritance. Well, the UK publishers, Mira Ink, decided to split the five stories up and sell them individually on your eReader.

There are five stories in total to choose from. You have Calliope/Hera, Ava/Aphrodite, Persephone, James/Hermes & Hades/Henry. This is the order you're meant to read them in. But seeing as this is me, I won't do that. I have three on my kindle (Ava/Aphrodite, Persephone and James/Hermes - the other two didn't rock my world when I read the summaries on Amazon) and I decide to read them in a random order and before I read Goddess Interrupted (sorry Mira Ink!).

So, God of Thieves follows James/Hermes (I have no idea what to call him!). Now, he likes to cause a bit of trouble. But after what happened to Persephone, the family is mad at James/Hermes. But when two gods just fade, they turn to James/Hermes to find out what happened. Behind Zeus's back, Hermes/James goes down to earth to find out... But will he like what he finds?

I'm not going to lie, I read this while a space of an hour. I didn't expect to read it so fast but I enjoyed reading from James/Hermes's point of view (sorry for the dual names. BLAME AIMEE CARTER! Though... she does explain in this story why the Gods changed their names...) . I always liked him when I read The Goddess Test so I hope he's in Goddess Interrupted (and because I know Persephone features heavily in this, I will read that story quite close to or after I read Goddess Interrupted so I understand her story).

This is very much a fan's read. If you're the fan of the series, this and the other short stories will thrill you no end. I will review the other two stories on my kindle in the next few weeks (no rush!). If you're trying this out to see if you like the series, you might get a tad confused over what's going on...