Right, I know this is revealed last week, but we have another Beautiful Creatures trailer and... well... it kick  butt! I love it! I am SO dragging my family and friends to this. Sorry everyone I know and love, but you will (hence my plan to read the whole series next year). So, here's the new trailer... and Emma Thompson is AWESOME! Just saying! 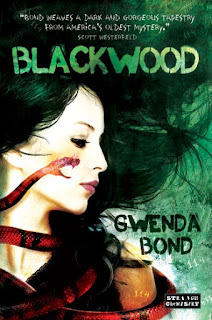 Second of all, fans of Blackwood by Gwenda Bond, get excited. News has been released that MTV is developing a TV show based on it. Kelsey Grammar's (Frasier to you and I) production company, Gramnet Prods, will be producing the show with Lionsgate TV and comic book and TV writer Peter Calloway will be writing the pilot. If MTV like the pilot, then we MIGHT get a full blown series!

Now, for those of you who haven't read this (like me), Blackwood follows Miranda and Phillips, two teens with their own troubles. Miranda is a misfit teen from Roanoke Island's most infamous family and Phillips is an exiled teen criminal who can hear the dead. They are forced together when the Lost Colony legend repeats itself. Hundreds of years ago, 114 people vanished without a trace. And it happened again. And one of the new 114 people missing is Miranda's father...
Posted by Pewter Wolf at 07:00:00