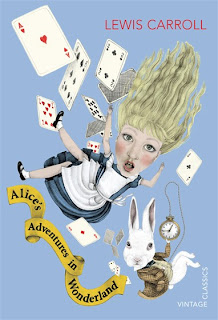 I have to admit something. I adore the Disney versions (both the animation and the Tim Burton version - "The Alice?"), but I have never read Lewis Carroll's stories of them. I knew they were two stories of Alcie adventures merged together, but never read them. So, when the lovely Emma from Book Angel Booktopia sent me a copy as a surprise (I love her because she thinks of books and shares them with people), I thought "Ok, I will have to read you in the near future." But it took reading several quite dark books and me beginning to feel I might slip into a reading slump to grab this.

I think we all know the stories. In Alice's Adventures in Wonderland, Alice falls down a rabbit hole, chasing the White Rabbit. Here she meets the Dodo, had tea with the Mad Hatter and the March Hare, play croquet the Queen of Hearts and met (my fave character) the Cheshire Cat. In Through The Looking Glass, Alice walks through a mirror into world that feels like a huge chess game, meets the Red and White Queens, talk to some talking flowers, was told the tale of the Jabberwock ("She kills my Jabber-baby-wocky!?") and meets Tweedledum and Tweedledee.

It's very weird to read this as an adult because, I think, if I read this as a child, I would have loved it. And a tiny part of me love it. But while I was reading it now, as an adult, all I could think was "If Lewis Carroll tried to get this publish today, he couldn't. It would near impossible to get this publish today. So, how did this become a children's classic?" That was what I was thinking. I wondered how it became a classic. I think Disney help cement it, but I might be wrong.

It was weird. And insane. And I needed that. So, this was the perfect book to have after reading dark books as it was a relief. There was no pressure. And, I watched Tim Burton's Alice in Wonderland and I kept going "Oh, this was in Alice in Wonderland" or "Oh! That's why her knights are chess pieces!" or "So, that's why we have the Bandersnatch, the Jubjub Bird and the Vorpal Sword! They're mentioned in the Jabberwocky poem!" (I didn't know Lewis Carroll wrote the Jabberworky poem so this was very new information for me!)

I did have issues when I first finished the book but, since then, I have watched an Alice In Wonderland so some of my issues have gone. Bar one. And this is aimed more at the publishers than you guys so...

To my knowledge, before a book gets published, publishers have editors and proofreaders to read the book and make sure that there are no mistakes in the book. However, I found TONS of mistakes. TONS! Most of them were grammar mistakes (for example, Alice would think something and then she would speak. Expect you had no idea when the thought ended and the speaking began because there was no quotation marks at the start of Alice speaking. Or the one sentence when Alice was playing croquet and the sentence read She she went in search of her hedgehog. Sorry, but she she? Only one she is needed). Small mistakes and yet, these slipped through and they got published. If this happened once or twice, I would have let it go, but these kind of mistakes happened ALL THE WAY THROUGH THE BOOKS! And that is very annoying to a reader. Well, to this reader. I can't speak for all of you guys.

I know this happens rarely (this is the first book that this has happened since I have started blogging - if not, ever!) but it's makes reading the book harder as you're going "Is that how it's meant to be...?"

While I do like it and I now truly "get" the Alice movies, I have been bought up on the Disney movies so my love is going towards them. But, if you want to read what the movies are based on, then get your hands on a copy (maybe not this edition, if you can help it)...