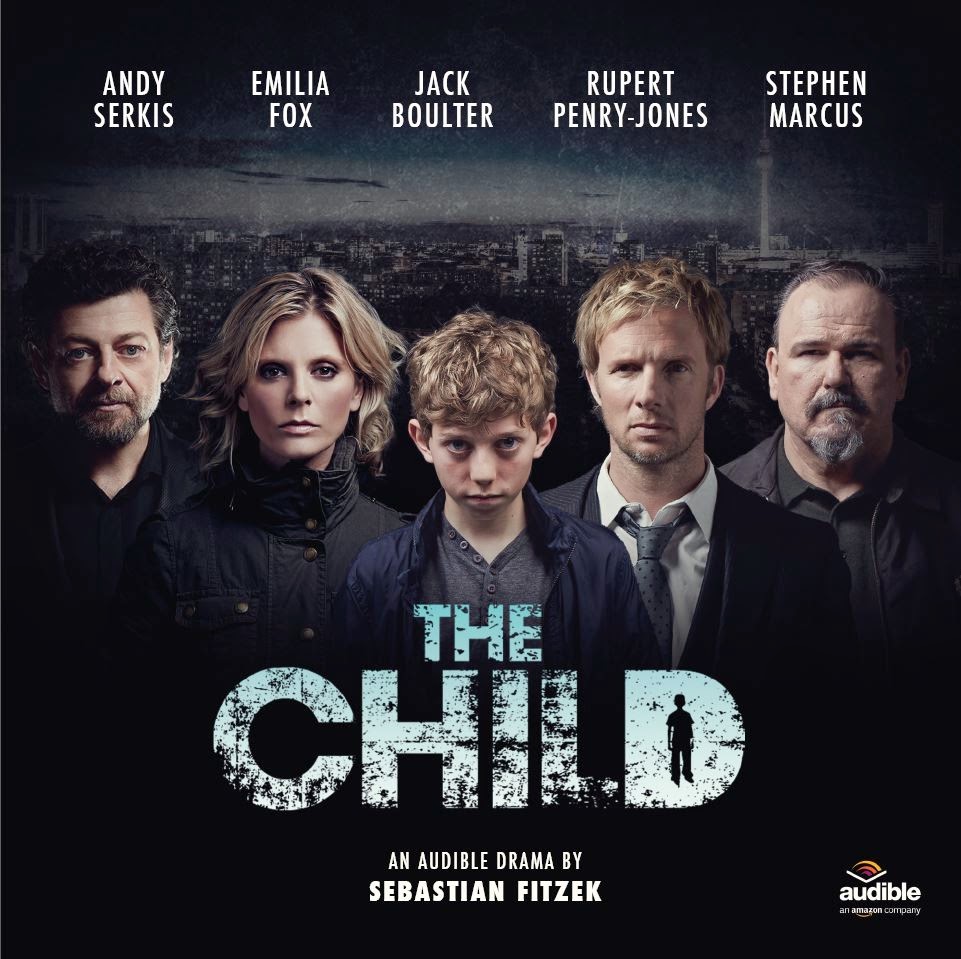 This audiobook/audio dramatisation doesn't come out till tomorrow, so I am very lucky to listen to this and review it. So, thank you Felicity at Midas for email me and going "Does this sound like something you might want to listen to?" and thank you Audible.co.uk for allowing me an early edition of The Child to listen to for review.

In this, Audible Studio London's first full cast audio dramatisation (yes, their first!), The Child is based on the novel by German thriller write, Sebastian Fitzek. When Robert Stern (voiced by Rupert Penry-Jones), a successful defense attorney is asked by former flame Carina (voiced by Emilia Fox), he didn't expected her to come with a ten year old terminally ill Simon. A ten year old boy who claims that in a past life, he murdered people. Bad people.

When they go to one of the sites where Simon claims to have murdered and buried the body, Stern and Carina are shocked to discover remains of a man with a axe embedded in his skull. An event that happened 15 years ago and Simon is claiming to have done.... But before long, Stern is discovering more bodies - bodies Simon's claimed to have murdered - and soon, Stern, Simon and Carina are on the run from the Police, trying to the get to the truth of these murders and a private tragedy that happened to Stern 10 years ago. Is there such a thing as life after death? Is Simon really a murderer in a past life? And if he isn't, who is? And how does Simon know the terrible things no ten year old should ever know...

Ok, I finished this very late last night (on the way back from seeing Guardians of the Galaxy - so good!) and all I was doing on my drive home was gasping.

But am getting ahead of myself. My thoughts of the story - after I got over the first hour where I was getting my head round the idea (which was the main reason I wanted to listen to this!), it sucked me in. Everything I listen, something happened that changed the plot and I kept going "Are you serious?!". I love a good crime/thriller where there are a LOT of twists that move the story in a new and scary direction. I think, on Twitter, I said this story from "Ok, this is odd" to "ok, this is getting creepy" then "Seriously creepy" before it went "FREAKY STORY!" and "OMFG!"

The actors for The Child are really good and well suited for their parts Rupert Penry-Jones, Emilia Fox, Stephen Marcus and Andy Serkis were excellent for their roles. And, once I got use to him, I liked liked Jack Boulter as Simon. The narrator of the story, Robert Glenister (who narrates The Cuckoo's Calling and The Silkworm) was an excellent choice. I will have to listen to more of him in the future!

Ok, there are a few problems I have to get out of the way. My first is that this is an audio dramatisation, and yet, we had a narrator reading us the story before we had the voice actors act scenes out. It's a weird hybrid of tradionally audiobook and dramatisation. Maybe all dramatisations are like this and, because I'm not use to them, I found it jarring for the first 30-45 minutes. But once I got use to it, I was fine.

Second, while we have Robert Glenister as the narrator and yet, we have another gentleman introducing us to the audiobook, introducing us to a new part with quotes and then the credits at the end. Usually, it's the same person doing it all, so why the change? A last minute decision or was this a way for listeners to know one part has ended and a new part has began?

Third is music. For some reason, I found music between scenes weirdly too long. Only by a few seconds so, yes, this is a me thing. But, there were times I wanted to the music to be shorter so I could get back to the story!

My last is that The Child, at times, felt like it was a story within a series. Maybe it's me overreading things, but there was so mcuh information and backstory between characters, I believe that we've skipped a few interesting novels to get The Child and I hope Audible Studios London go back and do the rest of the series, if this is part of a series...

But this was a good thriller, full of twists and turns and great actors! I do hope we get more productions from Audible Studios London...
Posted by Pewter Wolf at 19:51:00