GoodRead - A Slip Of The Keyboard 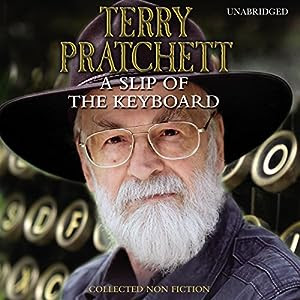 Confession time. I have never read a Terry Pratchett - well, I think I might have read Wyrd Sisters but don't quote me on that. But Terry Pratchett is always been one of those authors that has so much buzz around them, that's a bit overwhelming. It's the same with Jane Austin. There is so much respect and love that if I dare either of them and went "They were ok", I might have been given death glares...

So when the lovely Felicity from Midas PR asked if there was any audiobooks coming out in the past few months that I fancied reviewing, I saw this collection of non-fiction essays from Mr Pratchett and mentioned that these would be an interesting listen as this would not only introduces me with Terry's writing but also, introduces me to non-fiction - a genre I'm not that well read in.

A Slip of the Keyboard is a collection of non-fiction essays spend through Terry's life via three sections. Talking about his life as a writer, a look into his childhood, Discworld and then his thoughts of his Alzheimer's Disease and his opinions of assisted dying.

Now, seeing as non-fiction isn't my comfort zone, I went into this a bit uncertain on if I would enjoy this. And for the most part, I did. I liked hearing Terry's ideas, thoughts and his musings about life, writing, Discworld (a series I really need to investigate) and on assisted dying.

Now, assisted dying and Terry's battle with Alzheimer's were subjects I thought I would find taxing and upset to listen, but instead, I find them very interesting to hear his thoughts and made me, at several points, go "He does have a point here, but I'm not totally convinced on his reasoning on that point."

I do have problems with this collection (and the audiobook). The first was how the audiobook was set up. There were times I got confused on what essay or article I was listening to as the gaps between when one ended and another began were quite short at times and, there was a few times I think two essays merged into one in my brain and I didn't realise this till halfway through the second essay.

My second is, at times, it did feel a bit repetitive. You can tell this is a collection spanning years as some jokes, phrases and ideas were repeated and with this collection, two essays will have the same joke and the essays would be following each other. But, with the nature of this book, I understand this would happen from time to time.

While this isn't exactly something I would rush out to read, I am glad I have had the chance to listen to it. I do have plans to read more of Mr Pratchett (Stevie from SableCaught made me buy Mort and I have plans to read that soon) and I hope it makes me think about the world around me a little more. But I think this is very much for the fans who will devour anything Terry writes...
Posted by Pewter Wolf at 22:01:00