As some of you guys are aware if you're big Night School fans, a small web series has been released and yesterday, we had a new episode. Power focuses on one character: Nathaniel. If you haven't seen it, I shall link it below...

Seen it? Ok, we can talk now as I don't want you guys to go further in case of spoilers. If you haven't watched it and we let something slip, you only have yourselves to blame...

I have been very lucky that the director of the series, Jack Jewers, asked if I wanted to be involved in some way to show off this series. Of course, the answer was yes. I am a huge fan of the Night School series so it was a no brainer.

And I am very honored to have Danny D. Carmel on here, chatting about how he got into the mind of the power-hungry Nathaniel. So, before I hand it over to Danny, I must say thank you to Danny and to Jack, both for their time. If you want to follow either of them (and CJ Daughtery) on Twitter, you could go to @DannyDCarmel, @JackJewers &/or @CJ_Daugherty. Or, you can follow the Web Series on YouTube at youtube.com/nightschoolbook


What it was like playing Nathaniel?
Nathaniel is a very different kind of character to my usual roles, which have generally been boisterous, young and warm characters. Not so with Nathaniel; He's older, colder and bolder.

So getting into the mindset of this power-hungry man was vital. Aside from asking C.J. a series of questions about his back-story and motivations, I set-about about finding real-life people that Nathaniel could resemble and studied them. Their reasonings, their mannerisms, their outlooks - it unravelled some pretty interesting insights. Like, how much crime figures and Members of Parliament share similar traits, but for opposing goals (generally). Nathaniel internalises a lot of these, such as cunning, ruthlessness and persuasiveness, which he's able to bring into use in the right measure, at the right times. That's a big asset of Nathaniel's timing. Knowing when & where, as well as how, to get people on-side. It's one of Nathaniel's strongest assets. But his temper, impatience & aggression are his weakness. We tried to show that by keeping his violent edginess doing battle with his persuasive pleasanteries, and having neither the time nor patience for either! 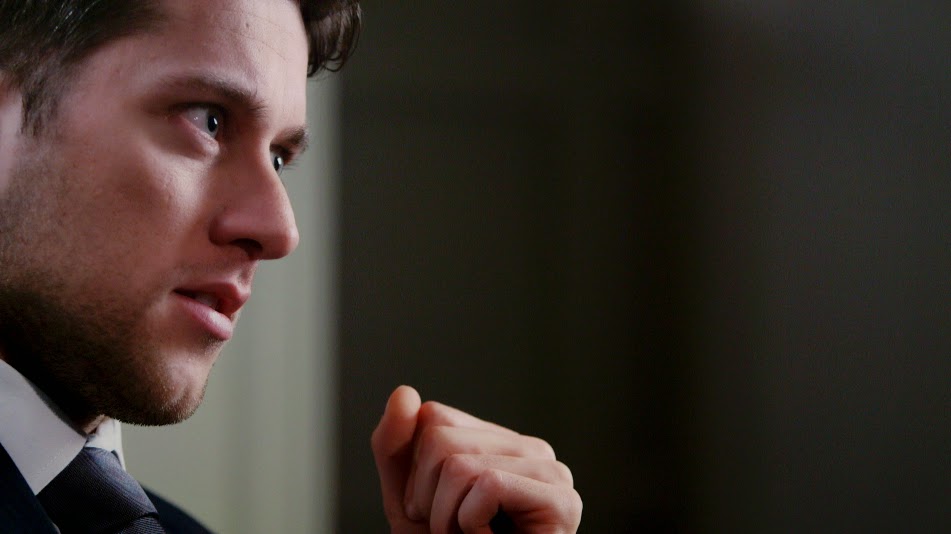 We aimed to really bring this out in Nathaniel's eyes. In a sneaky way, I tried to grab some inspiration from that famous 'Restaurant Scene' in the Godfather. Where Al Pacino's eyes are saying far more than anything or anyone else is. You can see the anticipation, the second-by-second decisions he's making about whether to kill this guy, or not and what the repercussions would be. That's the effect we were trying to bring out here. Is Jeremy (the journalist) serious with these questions/allegations? Does he know I have a virtual gun pointed at him? Does he know that I already know this interview isn't going to air? Why does he say these things to me, when he knows I'll kill him for it? I was trying to convey those menacing questions raging behind a smiling suit & tie.

Finally: Playing someone who is as far away as you can get from the trait of humility was also tricky initially, as it is incredibly humbling to work opposite Damien Thomas, who is a fantastic & highly-accomplished actor. That is especially true for me, because I grew up watching Damien in the Hammer Horror movies in-which he played the lead role, well before I was even born! However, all that faded away after rehearsing with him and Kunju Li (who plays the lovely producer/ camera operator, Lucy). Damien's enthusiasm and passion quickly made us realise what a privilege we had to be working with him. Awesome Director Jack Jewers and the wonderful team he put together, made this journey all the more exciting and thrilling. I hope that the Night School fans will take away a whole new world from the Web-series. (If they do however, it will only be because Nathaniel wanted it to happen.)
Posted by Pewter Wolf at 09:00:00