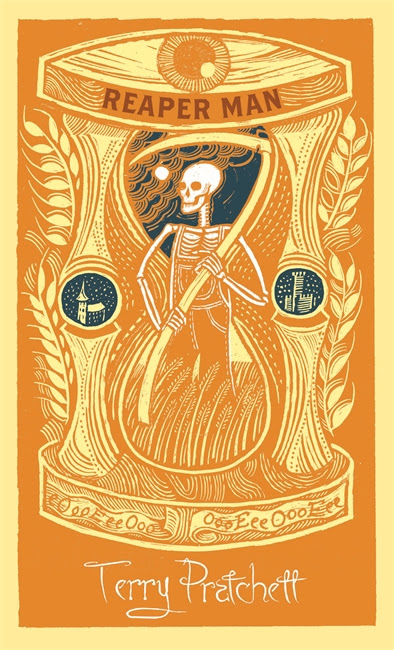 Hello and welcome to my spot in the Terry Pratchett Blog Tour! Today, I will doing a small-ish review of the twelfth novel in the Discworld series, Reaper Man.

Death is gone. Just gone. Presumed... er... missing. And what would happen to the Discworld now a important public service is withdrawn? Chaos, that's what. If Death doesn't come for you, then what do you do in the mean time? And what happens to all the life force that's floating about...? And where did all those snow globes come from?

Meanwhile, on a farm far away, a very tall and very thin man who is excellent with a scythe has come to gather a harvest...

Ok, am going to admit this. I have only just got into reading Terry Pratchett. Before last year, I only read one of his books and for the life of me, I can't tell you what book it is. It just went straight over my head. But in the summer of last year, I audiobooked A Slip on the Keyboard and after putting it off for quite some time, I read Mort back in February. So, I am still new to his world.

But Reaper Man has always been one of his books that has intrigued. Not sure why. Maybe it's the old cover of Death sitting in a field. Maybe it was the idea of Death just going...

But I finally read it. And I loved it! I didn't think I would enjoy myself as much as I thought I would. I just galloped through it, reading it very late into the night (using my phone as a light as I don't have a bedside lamp at the moment!) and trying to squeeze five minutes worth of reading before I go to work.

And Death is such a wonderful character. How he saw the Discworld and the ideals of life and death were interesting and, at the same time, funny. He might be my fave character in the series - and I only really remember 2 Discworld books well!

I know you guys were expecting a review with pros and cons (the only con I could think of is the ending - I liked the ending but there was something about it. Maybe because I was rushing it at half past midnight!), but I enjoyed myself reading this. I loved this book and I have plans to read more Discworld. So much so, I have been snooping on kindle and have downloaded far too many samplers to figure out my next Discworld book - Wyrd Sisters, Hogfather, Thief of Time, Maskerade...

Where should I start? I shall be following the Terry Pratchett Blog Tour with interest and, if you are a fan of Terry's work (Discworld or any others), leave me a comment and tell me what I should read next!
Posted by Pewter Wolf at 06:30:00