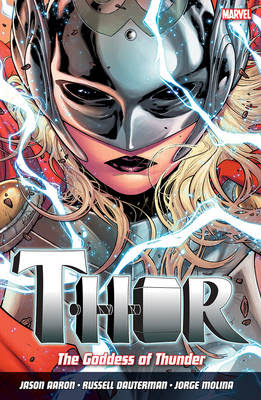 I am trying to get better with graphic novels. I always like looking at them in bookshops but I always feel overwhelmed by them. I'm still new to this world and each character or series has an arc and is linked to the previous storyarc.

But Thor: The Goddess of Thunder welcomes a new era where we have a female Thor. And it's an interesting tale... I have been curious over this since the news came out. So when I saw it in Waterstones this past weekend, I picked it up and walked to the till without much of a second thought.

Thor is no longer worthy of his hammer, Mjolnir. But Mjolnir needs a companion to restore the balance between the Ten Realms. And with the dark elf, Malekith and the Frost Giants on the rise, who will lead the charge against them?

A mysterious woman who is deemed worthy...

Now, this is very interesting. It's a little different to Young Avengers: Volume One as while this is a good place to start with Thor, there are moments where it does back to previous story arcs. For example, until I read the blurb, I didn't know who had whispered to Thor which, in turn, made him unworthy of Mjolnir.

What I found interesting, story telling wise, is making Thor female. This is flipping Marvel on its headband it feels refreshing. We have two Thors fighting and coming to a point of understanding, all the while having other characters coming to terms with these turns of events. Thor's father, Odin, is furious and becomes determined to get Mjolnir back, while Thor's mother, Freyja, takes this news in her stride.

Another interesting thing I like about this is that the new Thor's identity has been kept a secret. She wears a helmet over her face and the only time her identity could have been revealed, Mjolnir returned to her. While the old Thor and other characters saying that there's something familiar about her, it hints that she is a person from the Thor history.

From what I understand, her identity will be released in Issue 8 (or Volume 2) and this is both a good thing and a worrying thing. Good as it means we warm and like this new Thor, but I am worried over whether this is a long term move, or whether this is more short-termed and, because of this, a publicity stunt.

In this volume, there are five issues and, within the first four, I really liked the art work. It was clean and smooth. But with the fifth and final issue, the art changed and it becomes jarring. It doesn't flow and, personally, I don't like this artwork. It looks oddly clay-like.

I do like this and I will read the next volume, but I wasn't 100% convinced over the artwork and the style.
Posted by Pewter Wolf at 22:35:00