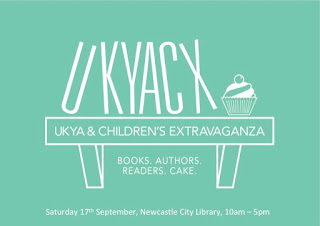 Why, hello everyone! Welcome to my stop on the UKYACX Blog Tour. This post is part of the YA leg of the tour (there is another for Middle Grade and that will be crash-landing onto this very blog in the future).

Today, to celebrate UKYA, I am joined by Roy Gill. Roy is the author of Daemon Parallel and the second book in the duology, Werewolf Parallel. He is, also, a script writer, working on scripts for audio series such as The Confessions of Dorian Grey, Iris Wildthyme, and Dark Shadows (all released via Big Finish).

And because he can write both scripts and books, I wanted to know more about the differences. So, before I go any further with my questions, I must have Roy for taking time out to answer my questions (and I could have asked him LOADS!) and Kerry for letting me tie-toe into this tour!

Again, before I hand it over to the questions and Roy's answers, if you wanna check Roy out online, you can go to https://roygill.wordpress.com or check him out on Twitter & Tumblr. Ok, now, ONWARDS TO THE QUESTIONS AND THEIR ANSWERS!!!

Was the jump from writing scripts to writing a novel and going back-and-forth easy or difficult for you?
The first leap was tricky - as these things always are - as I was learning how to work in a brand new format. But I’ve always loved writing dialogue - and dialogue is what drives radio drama - so I like to think I embraced it pretty quickly! The more audio I’ve written, the more I’ve understood about the structure and strengths of that form.

Is there much difference between writing a script and writing a novel?
Audio takes less time - a script requires fewer words than a novel, and the deadlines are much tighter - you’re working on one project for a number of months, usually, not years! But my preparation for both isn’t that different - I have a storyline worked out, and it’s not unusual to have to do some research.

With a novel, the job of creating the story in your reader’s mind is all down to your words on the page - with a script, your words are only the starting point, there’s also going to be a lot of hard work done by actors and directors and composers and sound effects designers and so on! If your collaborators are good - and I’ve been very lucky so far - they’re going to help hugely in bringing that world to life.

When you write scripts for Big Finish, you’ve written with well-known and well-loved characters (Dorian Grey, Iris Wildthyme and the characters for Dark Shadows). Is it easier or harder to write with these characters or new characters?
When I’m writing a character, whether they’re well-known or entirely new, what I’m looking for is a voice - a way that person speaks and thinks that is uniquely like them. Once I’ve got that in my head, dialogue and scenes start to flow. So, if I'm working with a character that already has a history - like Dorian Gray or Iris or Angelique from Dark Shadows, say - I've got a great starting point, as that voice is there. You don’t have to invent from scratch - you can reach for it! But you still have to take them through a story and throw them into situations that are uniquely your own... When it’s going well, it’s just writing. I don’t stop to think whether I’m inventing dialogue for an old character or a new one.

Is it easier or harder to write an audio play compared to a book, or is it visa-versa? Or do both have their own limits?
There’s always moments when I’m writing and wrestling with a problem that I think - if only this was a book or script instead (i.e. NOT the form I’m currently writing) THEN I could fix this really quickly and easily! But that’s just wishful thinking, probably...

As to which is easier, I think that probably depends how your imagination works...? I certainly know some novelists who are very focussed on characters’ inner thoughts and claim to have very little visual imagination at all. I tend to think in images and dialogue first, and then find a way to get that down neatly and concisely on the page.

Before we go, tell us a bit about the last audio play you wrote and your latest novel.
This is a tiny bit tricky, as the play I wrote most recently hasn’t been announced yet - so I can’t officially talk about it! - and my next novel is still gestating. I’m a tiny bit superstitious about saying too much! So if you don’t mind, I’ll say a little about the most recent releases instead?

For Big Finish, my most recent play was Blood & Fire. It’s a fiftieth anniversary special for Dark Shadows - an American TV show that’s basically the grandaddy of all kinds of epic supernatural family sagas. It’s full of twists and surprises for the fans, but it’s also very much intended to be a route in for new listeners too. Everything you need to know is in the story! Producer Joseph Lidster describes it as " a big old adventure movie on audio. A witch goes back in time to destroy a family but finds herself up against a Phoenix. It's got sexy pirates, stolen jewels, love affairs, death, zombies... What more could you want?"

My last novel (for KelpiesTeen) was Werewolf Parallel. It’s a sequel to Daemon Parallel and follows the adventures of Cameron Duffy across an alternate daemon-filled version of Edinburgh. At the start of this book, he’s building a new life alongside unpredictable wolf-boy Morgan and prickly orphan girl Eve, but it’s not long before his world is torn apart… Werewolf Parallel's got a lot of myth and magic and monsters, it’s sometimes funny and sometimes sad. I guess, in the end, it’s about identity and sacrifice - all things I seem to write about quite often, in one way or another! I’m quite proud of my Parallel books - and I’d be thrilled if a few more people would give them a go!
Posted by Pewter Wolf at 09:00:00