DNFing The Girl Who Saved Christmas 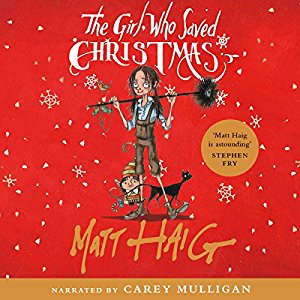 Now, like some of you would be aware, I would pretend this didn't happen. I would keep it a secret. But earlier this year, I decide to tell you guys every time I DNF something - whether be book, ebook, audiobook, etc - because I wanted to be honest with you, dear reader. Sometimes, you just don't click with a story and it's ok to put it down and each of you go on your merry way.

But what is more annoying about this DNF is the fact that while I didn't like this and had to stop over an hour into the story, I LOVED the prequel.

So, why did I DNF The Girl Who Saved Christmas?

Now, if I can answer that question honestly, this post would be so easy to write. But, in fact, it's not. There was nothing wrong with the story. I've seen people read/audiobook this and LOVED it. So... why didn't I?

It's a mix of reasons. I wonder if it's because I listened to this so quickly after finishing the audiobook of A Boy Called Christmas. I fell in love with that story and it's so rare for me to read/listen to the second book in a series so quickly after finishing the first. I usually give it a few weeks and a book or two before I go back. I only gave it around 3 days...

The second is the reader. There is nothing wrong with Carey Mulligan. But I couldn't connect with her reading. I just couldn't gel with it, and I have no idea.

The third is the story - ok, this is a weird one but it was little things in the story that didn't work with me. Because I had listened to The Girl Who Saved Christmas so soon after A Boy Called Christmas, I kept comparing characters who featured in both and kept going "That character wouldn't have behaved like that in the previous story so why are they acting this way now?"

I kept nitpicking. I had no rush to return to the story (whereas now, with the audiobook I started a few days ago, I am blitzing through it and I have that itch to go back and listen to some more chapters). Nothing nagged me to get my iPod and listen.