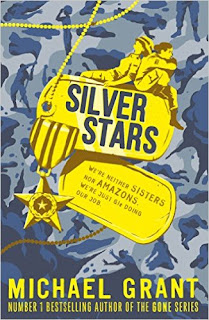 To celebrate the second book in the Front Lines series by Michael Grant, Silver Stars, Electric Monkey/Egmont asked if I wanted to be involved in this tour and I said yes. I haven't read the series, but in a world that is in the terrifying climate we're in, reading books like this are vital, in my opinion.

So, where can I go with a post about "What If" during the second World War? Well, you can thank a random [contains swear words] youTube video about that... (and please forgive me if I make a mistake. I am not well-versed in US history so had to use the Internet to get information).

For a long time, the United States didn't realise how terrible the Holocaust was in Europe. Americans, at the time, knew the Nazi were encouraging vandalism and hate crimes towards Jews. But the US government didn't feel strongly enough to give refugees a safe place. At one point, the US turned a ship, filled with approx 900 Jews, back to Europe - most are feared to be have died in gas chambers. After this, the US Government reject a proposal to allow 20,000 Jews children to claim sanctuary. Anne Frank and her family were refused asylum. Albert Einsten wrote letters, begging Franklin D. Roosevelt to let Jews in.

The reason? Taken from a speech made by then-President, he said "Today's threat to our security is not a matter of military weapons alone. We know of other methods, new methods of attack. The Trojan Horse... Spies, saboteurs and traitors." (Fireside Chat 15: On National Defence - May 26th, 1940).

But what if... what if the US did allow Jewish refugees in during the Second World War? What if that bill to allow 20,000 Jewish children to stay in the US went through? Or the US didn't order the boat with 900 Jews to turn back to Europe? What would have happened if the American Government was brave enough to help those in need of help? Countless Jewish lives would have been saved, right? The death toll of those who died due to Nazism could have been lower than it is today.

But could this have changed when America joined the war? Japan bombed Pearl Harbour on 7th December 1941 and Germany decaded war on the US four days later. The vote on the bill to allow 20,000 Jewish Children to come and stay in the US was on January 20th 1939, less than 2 years earlier. So, if this bill went through, would have the US joined the war against Nazi Germany and its allies sooner? If so, would the war have ended sooner?

And after the war, what would have happened to the US then? Would the US be more kind toward refugees? Show empathy and compassion? Or would there be more cruelty and a possible rise of white supremacy, all in the name of "America First"?

And far would the effects be felt, both good and bad? Would it be a short period of time (a few years?) or would be we be feeling them today? Would be living in a kinder world for showing kindness and empathy? Or would be living in a crueller world, because people feel that their kindness was abused in some form?

This is the problem with "What If". You ask a simple question and the answer is far more complex than we expected. It's a butterfly effect - a small change could create huge consequences, both good and bad.

So, until we can treat time travel, we can play what if in our heads, in books, in Tv and radio and films. And we can look back into history and make sure we don't repeat the mistakes of our past and, because of this, create a hopeful, better future...

Oh, while you're still here, Egmont is hosting a small contest to celebrate the release of Silver Stars! They are giving away the whole GONE series (which I haven't read but I have heard really good things about) and both novels with the Front Lines series (this includes the World Book Day novellas, Dead of Night). Let's see if I can get the contest to work on here. If nothing pops up, check out https://gleam.io/9wbLd/michael-grant-competition and it will take you to the contest page. GOOD LUCK IF YOU'RE GOING TO ENTER!!! (oh, if you wanna check them out on Amazon, Egmont asked if you use this link for tracking reasons...)