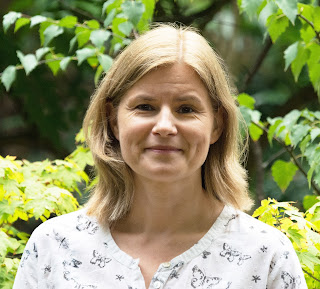 I am SUPER THRILLED to welcome Sue Wallman to the The Pewter Wolf! Sue's second novel, See How They Lie, has just come out and promises to just as addictive reading as her debut, Lying About Last Summer. Which, as some of you are aware, was one of the chosen book for Zoella's Autumn Book Club last year and, a few weeks ago, was announced winner of the Zoella Autumn 2016 Book Club!

If you're not heard of either books, let me give you the briefest of outlines on them both. Lying About Last Summer follows Skye who is sent to a camp for grieving teens after the shock death of her sister. But when Skye receives a text message from her dead sister, Skye has to confront the past and figure out the truth of the texts, even though the danger might be closer than she thinks...

In See How They Lie, we follow Mae, who lives at a luxurious psychiatric and well-being facility. There are rules for everyone who lives and work there. When Mae breaks the rules, she is punished and everything Mae believes is throw upside down. She's there because her psychiatrist father works there... right?

To celebrate this, Sue has kindly (and at a super fast speed! Do you authors ever sleep?!) written this lovely guest post about her Zoella Book Club experience!

Now, before I hand you to Sue, I just want to thank her for writing this post. I know this week is a bit of a whirlwind with See How They Lie coming out but thank you! I, also, want to thank Olivia at Scholastic for asking if I wanted to be involved in some way. Thank you both!

One more thing! If you want to check Sue out online, she has her own website - suewallman.co.uk - and you can check her out on Twitter at @swallman. All set? Ok, over to you, Sue! 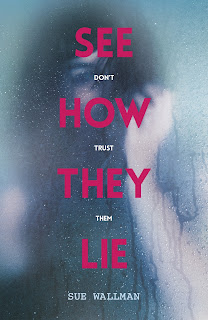 The way I found out that Lying About Last Summer had been selected for the Zoella Book Club was this: I went with my agent, Becky Bagnell, to the Scholastic offices to meet my new editor Linas Alsenas. I’d written See How They Lie but during the editing process, my then editor Lucy left. I was really disappointed because I’d loved working with Lucy, but she’d assured me I’d get on with Linas who was taking over. As soon as I received one of Linas’s lovely bouncy emails, I knew it would be fine but I’d wanted to meet him in person to put a face to the name at the bottom of those emails.
When we arrived, we did the “hey, so nice to meet you”s and Linas asked Becky and me if we wanted tea or coffee, and we both declined because we’d just been out for lunch (yes, this was one of those days I’d dreamed about when I was agentless and publisherless). We went into a meeting room and discussed a few things about See How They Lie, and then we talked about possible ideas for my next book. Next Linas left the room because he said he had to fetch something. He came back in with some paperwork and said, “I’ve got some exciting news. Lying About Last Summer’s been selected for the Zoella Book Club!”
I remember the moment clearly. I put my hands to my face which in body language terms probably means that I had to block off a few senses to take in the news. I knew what this meant for my book – that it would reach more of my target audience, impact sales, and I would, hopefully, earn out my advance! I had no idea it had been put forward for the book club, and I couldn’t believe that it had made it through what must have been a massive selection process. Then Linas walked over to the window sill where he’d hidden some champagne and glasses behind some books!
We talked about some of the content I’d be asked to provide for the WHSmith blog (EDIT: You can check them out here, here, here and here!) – and I was told it was all TOP SECRET. Majorly top secret. I had to keep my mouth shut for FOUR WHOLE WEEKS until one morning when I was at the fracture clinic with my daughter who’d broken a finger (I digress…) I received an email telling me the announcement would be that afternoon. At around 4pm, Zoella uploaded a video revealing the books for her Autumn club. Lots of my daughters’ friends saw it and began contacting them. They were super-impressed and that was really nice.

I loved the colours of the new cover – I’m a big fan of that purpley-pink foiled title. Friends sent me photos of the Zoella book stands in WHSmith stores around the country and at airports. I told my friend Helen who works in my local WHSmith the big news and I was given a free latte from the instore Costa by the manager (reader, I had hit the big time!). I took over WHSmith’s Twitter feed for a takeover, and I watched Zoella’s review of Lying About Last Summer with my youngest daughter on her laptop, and we whooped loudly.
Being voted the overall winner of that Autumn book club made me extremely happy. I felt so grateful for those votes. It had taken me a long time to get published and here was my debut book’s moment in the sun.


No, I haven’t met Zoella (which has disappointed some students at the school library where I work), but I’m thrilled to have been part of her book club.

(Tiny Author's Description [Scholastic asked if I - The Pewter Wolf - could include this] - Sue Wallman has lived in various places, including a hospital in York where hr father was a psychiatrist. Sue has also lived in Paris where she was an editorial assistant for an American newspaper. She now lives near Kingston-upon-Thames, Surrey.

Sue has always loved words. After attending Oxford Brookes University, Sue became a magazine journalist. She has been a sub-editor, letters page editor and deputy features editor.
In May 2016 Sue Wallman’s debut novel, Lying About Last Summer, was published. Her second novel, See How They Lie, is out in March 2017.)
Posted by Pewter Wolf at 07:30:00