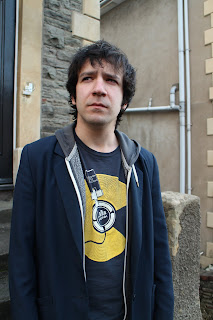 Hello and welcome to my stop on the Stanley's Ghost blog tour! Hope you're all good this Tuesday (or whatever day you are reading this!) and I would love to welcome Stefan Mohamed to the Pewter Wolf! Stefan is the author of the Bitter Sixteen trilogy, starting with Bitter Sixteen, Ace of Spiders and the final book in the trilogy, Stanly's Ghost, which came out a few weeks ago!

As Stanly's Ghost is the last book in a trilogy, I don't want to give too much away. So, going to give tiny info from the first book, Bitter Sixteen. Stanly is a typical teenager - expect the fact that his best friend is Daryl, a talking beagle. And expect for the fact that, when he turned sixteen, he gained the power of flight and telekinesis. And seeing as his rural Welsh town doesn't need a superhero, Stanly goes to London. Only to discover a good deal more weird and terrifying. Maybe he should have stayed in Wales...

Now, before I throw you into Stefan's guest post, a few thank yous and some links. I would like the thank Stefan for finding time to write this post. I know he must be super busy at the moment but thank you. Also, would like to thank Emma for asking if I wanted to be involved in this tour.

And now, for links. If you want to check Stefan out, you can check him out either via his website - stefmo.co.uk - or via his Twitter at @stefmowords.

Now we got that out of the way, over to you, Stefan!

Stanly’s Ghost, the final instalment of my Bitter Sixteen Trilogy, was without a doubt the biggest writing challenge of my life. Harder than any school or university essay, harder than any commissioned poem, harder than any other novel (so far). Apart from being the biggest in literal terms – the first proper draft was around 20,000 words longer than the final book, necessitating some brutal cutting – it was also the most complex in terms of the boxes that needed ticking.
I know that talking about ticking boxes makes the whole endeavour sound awfully clinical and uninspired, like I’m just listing the ingredients of a cake I’m grudgingly baking for a party I don’t want to go to. What I mean is that there were several very specific criteria that needed to be met while writing this book. I needed to satisfactorily conclude the over-arching story of the trilogy, tying up the various plotlines and themes. I needed to complete my protagonist Stanly’s arc, and the arcs of his fairly extensive supporting cast (oh, and let’s not forget beginning, charting and concluding arcs of various sizes for the new characters that I foolishly introduced in this final book). And on top of all that, I also needed to tell a new, complete story, so that the book could stand (at least slightly) on its own, rather than simply serving as a glorified epilogue.
And all this needed to be done with as much elegance, wit and subtlety as I was capable of mustering.
Piece of cake, right?
Now, I’m at pains to say that just because I can list these various criteria, even discuss them at length as though I have a clue what I’m talking about, this does not mean that I am definitively saying I fulfilled them all. Hopefully I did, to the best of my abilities. That’s really for the reader to decide. And so long as people aren’t unpleasant, I’m more than happy to discuss the ways in which the final product may have fallen short. And who would ever be unpleasant on the Internet? (Well, actually, I suppose I am a straight white male, so any vitriol directed at me will at least be heavily diluted – cheers privilege).
One challenging area was the whole ‘standing on its own’ thing. The book certainly tells a story that has a beginning, middle and end (congratulations me, you have fulfilled Basic Storytelling Requirement 1), and hopefully makes sense to somebody choosing to read it without having read its two predecessors. But much of the story and character progression might still be somewhat confusing without prior knowledge of the first and second instalments (Bitter Sixteen and Ace of Spiders). This was difficult to avoid – although arguably, in this age of Peak TV, massive decade-spanning shared cinematic universes, Netflix binges and the like, it feels as though readers and viewers are much more willing to embrace complex continuities and pages of ancillary material. Which is lucky, because I am, of course, planning spin-offs, prequels, sequels and sidequels for every character in the trilogy, no matter how minor.
Not that this removes the need for standalone stories, of course – in fact they’re probably more important than ever, from a time management point of view as much as anything else – but perhaps it at least slightly negates the need to make every instalment totally newbie-friendly.
Or perhaps I’m just scrambling to make myself feel better.
Is it too late to do another draft? 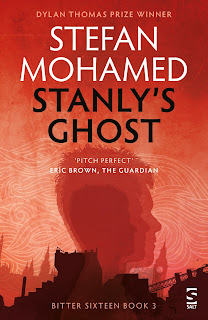 Anyway. Those are just a few of the practical and technical challenges I faced when wrapping up my trilogy – I haven’t even got started on the emotional ones. We all know how it feels when we come to the end of a book, film or TV series that we love, to whose characters we feel a connection, in whose world we are invested. We may feel energised, inspired, buzzing from the catharsis, but we may also feel bereft.
The feeling of completing a series as a creator is not dissimilar. I’ve been living with these characters, this world, for a good chunk of my life – nearly half of it, actually. How do you say goodbye to something like that? How do you disentangle yourself emotionally? Well, happily, as a writer with complete and total control over your fictional world (almost – sometimes they will be disobedient, and you just have to accept that), you do at least have a degree of agency that one rarely has in real life. In life, things happen the way they happen. They don’t always end satisfactorily. We don’t always get closure. At least with a book you can, to the best of your abilities, guide things towards an ending that makes sense. That does justice to the characters, their story, their hopes and dreams.
And hopefully, if you’ve done your job properly, the parting won’t be too difficult. It’ll hurt, yes, but in a good way. A worthwhile way.
Hopefully.
I guess we’ll see.
And if all else fails, at least there are those five hundred TOTALLY NECESSARY spin-offs to look forward to.
Posted by Pewter Wolf at 07:30:00