Ok, I know. I am very rare when I put Press Release up on the blog. It has to be news that makes me jump up and down in my chair and go "I HAVE TO SHARE THIS ON MY BLOG BECAUSE ARGH!!!". And I feel that this warrants that. And hopefully, you guys will be excited too.

I have to thank Ryan from Empire of Books (who has a puppy! A CUTIE PIE PUPPY!) for getting me in the loop and then Sarah from Penguin Random House Children's UK (that's a mouthful!) who saw my tweets and asked if she could send me the email in question because I wasn't on her radar. Hence the squealing!

But... guys, this sounds good! And all I can think of here is "BRING ME WONDER WOMAN!", "This is gonna be awesome!" and "Please don't screw this up!"

Planned for UK paperback release in August 2017, the first in the series is confirmed to be Wonder Woman: Warbringer, written by New York Times bestselling author Leigh Bardugo. Wonder Woman will be joined in January 2018 by Marie Lu’s interpretation of Batman, with Matt de laPeña taking on Superman the following May, and Sarah J Maas completing the set with Catwoman in September 2018. 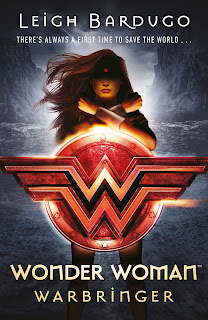 These highly anticipated coming-of-age stories will explore the origins of each character;with each author adding their own twist. Readers of fantasy and contemporary YA and comic book fans alike will find exciting references to existing legend and mythology, as well as a totallyunique new perspective onthe teenage years and hidden lives of the most well-known DC characters in comic book history.

Wonder Woman: Warbringer sees Leigh Bardugo, celebrated author of Six of Crows, Crooked Kingdom and The Grishadelve into the story of Diana, an Amazonian princess who risksexile to save a mere mortal - a valiant act resulting in a war of colossal proportion. In an epic narrative split between the divine world of the Amazonian tribes and modern day New York; Diana faces an army of enemies, an unexpected friendship and an inevitable betrayal in her quest to save the world from an age of bloodshed and misery, and become the DC Super Hero we know her as today.

Carmen McCullough, Editor of Children’s Fiction at Penguin Random House Children’s UK, says of this new initiative: ‘’I am thrilled to be publishing this incredible new series featuring some of DC’s best-loved Super Heroes and written by a phenomenal quartet of authors. These stories give us a glimpse of Wonder Woman, Batman, Superman and Catwoman before they become the legends we know them as today. Get ready to save the world with these totally kick-ass Super Heroes.’’