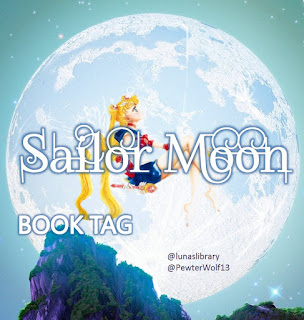 Ok, mini backstory. I was chatting to Luna from Luna's Little Library and went "Has there been a Sailor Moon Book Tag?" (there are but we didn't realise this till much later!). Luna wasn't sure so I wrote up some ideas and went "You know Sailor Moon better than me, what do you think of these?" and Luna read and made her own questions. So, Luna and myself would like to welcome you to our Sailor Moon Crystal Book Tag!

So, how does this work? Well, each Sailor Scout has a question that you have to relate to a book you have read or are going to read. Now, you can answer all the questions or you can just do barring the last four (so you can ignore Sailor Star Fighter, Sailor Star Healer, Sailor Star Maker and Sailor Cosmos). It really depends on you!

Also, Luna tagged a few people on her post, so I suppose I better do the same. Let's see... I would like to tag @ChouettBlog, @LoveMikaylaEve, @MaddieandBee, @bedtimebookclub & @betterwordspod.

You can join in with a blogpost, video, tumblr, podcast or however else you’re creativeness kicks in. And you can do as many or as few rounds as you fancy. I and Luna are doing all the rounds but you can do as many or as little as you want. It’s up to you what you fancy doing (plus, with so many characters, it’s easier to split them up, we found)!

At the end TAG someone (or multiple someone else’s) who love Sailor Moon, reading or a mix of the two.

ROUND ONE
INNER SAILOR SENSHI.
Sailor Moon
A book that has an unlikely hero/friendship at its heart:
Of course the first question we ask is the one I get the most stumbled on! Most of the books I enjoy reading have unlikely heroes or friendships at their heart. And seeing as I am deseperate not to mention Harry Potter, let’s say Artemis Fowl. He’s an anti-hero who, over the course of the series, becomes a hero.

Sailor Mercury
A book that made you think:
I think most of the books I hold dear to me made me look at the world differently and made me think. Harry Potter, the Twilight Saga, The Hunger Games, Sabriel all made me look at how I saw something and question it. Let's say Sabriel as, when I first read it, it made me question how I look at death and what happens after death...

Sailor Mars
A book that has strong feminist themes:
We Should All Be Feminists by Chimamanda Ngozi Adichie. This was one of the only few questions I knew the answer to without a moment’s thought.

Sailor Jupiter
A book that made you fall in love with food:
This is another hard question. Ok, it’s been a while since I’ve read this, but seeing as I’m not allowed to use cookbooks as my answer, am going to say The Amber Spyglass by Philip Pullman. I remember that there are two chapters in here that tackle food - Vodka and Marzipan. One of these chapters is vital to the overall story so I have to pick this, right?

Sailor Venus
A book you wish there was a prequel for…
Oh! WHERE DO I EVEN BEGIN?! Nearly every book series I love needs a prequel. But since Harry Potter is having the Fantastic Beasts movies and His Dark Materials has the new Book of Dust trilogy, am torn between two other series: The Hunger Games and The Old Kingdom series… Let's say The Hunger Games as I am curious over what happened to Pamen to create the Hunger Games in the first place...

ROUND TWO
OUTER SAILOR SENSHI
Sailor Uranus
A book that has LGBTQIA+ character/relationship:
The last few books I’ve read with LGBTQIA+ characters/relationship are Release by Patrick Ness and Noah Can’t Even by Simon James Green, and I have a load of my TBR (physical and ebook). Hopefully, will be blitz-reading them soon…

Sailor Neptune
A book that made you want to make a playlist for:
This is weirdly easy as, when we came up with this question, I started (then put on pause due to publication date) A Shiver of Snow and Sky by Lisa Lueddecke. Within the first 100 pages or so that I read, I could only read it while listening to Florence and the Machine, mainly the songs “Various Saints and Storms”, “Queen of Peace” and “How Big, How Blue, How Beautiful”.

Sailor Pluto
A book you want to go back in time and read for the first time again:
HARRY BLOODY POTTER! (Like I was ever going to say anything else). But, if you guys want a different answer, I might say The Cuckoo’s Calling by Robert Galbraith. But only if I can erase the knowledge of who Robert Galbraith is. I put a lot of pressure on this book because of who the author was and I think, if I went in knowing nothing, I would be more honest with how I felt about the book.

Sailor Saturn
A book that has a heartbreaking sacrifice:
Gabriel in Half Lost by Sally Green. Am going to say nothing else.

ROUND THREE
Sailor Chibi Moon
A book that has family angst/drama:
I REALLY want to say Noah Can’t Even by Simon James Green. But I’ve used that as an answer already so shouldn’t push my luck. There’s a book on my TBR that sounds family angst and that’s All About Mia by Lisa Williamson.

Tuxedo Mask
A book with a secret identity:
Any of the crime/thriller books can cover this. I mean, the killer trying to keep his crime secret, all the while pretending to be that nice chap from down the road… No? Ok, another TBR read - Defender of the Realm by Mark Huckerby and Mark Ostler. It’s basically putting the superhero genre and turning it on its head by throwing in the Royal Family. Now, how many of you are imagining the Queen wearing a cape and kicking butt like Captain Marvel or Wonder Woman?

Luna
A book of transformation:
This question has me stumbled as I’m not 100% certain what it means by “transformation”. But am going to say the Daughter of Smoke and Bone trilogy by Laini Tayor. If you have read the trilogy, you understand why I decided on this answer in the end....

Artemis
A book that featured animals at its heart:
Because I recently reread this, Library Lion by Michelle Knudsen and illustrated by Kevin Hawkes. I got this when in New York last year at the New York Public Library and the idea of a book loving lion makes me feel very happy.

Diana
Name a childhood book that brings you joy:.
A lot of childhood books bring me joy. The Tiger That Came To Tea, Omg: The Forgetful Cat, Peter Rabbit, George’s Marvellous Medicine, The Fantastic Mr Fox…

BONUS ROUND
Sailor Star Fighter
Name a book that you are tempted to read just because of the cover:
I think this happens to all of us. We buy a book or get it out of the library because of how pretty the cover is. And I have a few to go to. But am going to say The Iron Cast by Destiny Soria. It’s a simple yet eye-catching cover.

Sailor Star Maker
Name a book where a character’s loyalty never wavers:
Ok, I am going to call my Harry Potter Card and say - no, not Ron - Hermione. Throughout all seven books, Hermione stayed with Harry & Ron, and helped them. Even though she was in love with Ron, Hermione stayed with Harry to destroy the horocruxes, even when Ron left. Basically, Hermione is a badass friend and those two boys don’t know how lucky they are!

Sailor Cosmos
Name of book or character who redeems themselves:
I suspect a lot of people will say Snape for this. But I don’t think he redeemed himself. He did one good thing, but he did a lot of things that are unacceptable to me. The same with Draco, though I think I forgive him for his actions in Cursed Child (I know! Even I didn’t see that coming!) so maybe I will say Draco Malfoy - if we’re going to include Harry Potter and the Cursed Child. If not…

Just had a thought. What about Ian and his brother, Kyle, from Stephenie Meyer's The Host. It's a long shot but am stumped. Ian does have a very fast turnaround when it comes to what he did when he first met Wanda to where the story ended, but with Kyle, it's a lot slower pace...
Posted by Pewter Wolf at 12:00:00