eBook Review - Songs About Us 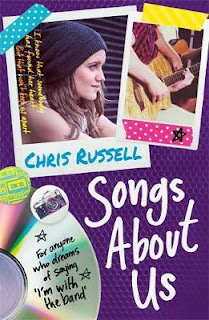 I have been waiting for quite a while to read the sequel to Songs About A Girl (review for when I read it last year is here!), so when I get my hands on a eProof/NetGalley edition, I had to wait a few weeks to clear my reading out (BOOKS EVERYWHERE!).

It's two months after the events of Songs About A Girl and Charlie is trying to get normal back into her life. She's rebuilding a relationship with her father, try and hang out with her best friend and worry about GCSEs.

But soon, she is taken back into the world of Fire&Lights, the hottest boyband on the planet. But things are different between the four now. Aiden is in a relationship, but is uncomfortable with it. Yuki is drinking and no one can understand why. And tension between Gabriel and Olly are running at an all-time high and they are close to coming to blows with each other.

When you're as successful as Fire&Lights, there is two ways you can go: up or down. And either way, they're going to take Charlie and everyone around them with them. Whether they want to or not...

It's a sugary, fun summer read. You can whizz through it and not come up for air for a while. You get sucked in. Plus, with some of the elements Chris tackled (LGBT+, mental health, etc), it was good to see it and go "YES!" over it. It's nice to have these characters and have them and their problems fleshed out.

But, at the same time, I didn't fly through this book as quickly as I did with Songs About A Girl. Some of the darker elements added to this annoyed me and slowed my reading down. Like I said, some elements I was for and most/all, I completely got why the book was taking us in that direction. But there were one or two elements/chapters/moments, where I would have to put my kindle down and leave it for a while, but I was getting frustrated over the characters and their reaction.

An example is one character. In the previous book, he was one of my faves because he was fun. I liked reading him. But, in this book, he changed. Of course, I got why at the end of the book, but there were several strong moments while reading, I was getting hugely annoyed over this character and the way their behaved.

While there were moments I got frustrated with the book, I did enjoy it. Maybe not as much as Songs About A Girl, but I am very much going to continue with this series when Songs About A Boy come out next year. Plus, with Songs About Us ending on that cliffhanger, I will be very intrigued how Chris is going to explain everything...
Posted by Pewter Wolf at 07:30:00