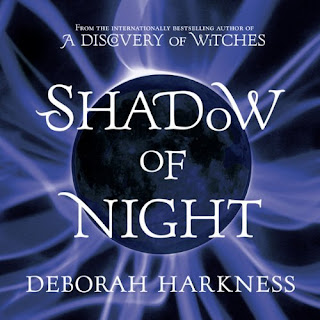 If some of you can remember that far back into time, I listened to the the audiobook version of A Discovery of Witches back in the old days of when this blog was a baby book blog (2011. I checked). I liked it, but I didn't love it due to one reason or another (length and writing style. Plus Matthew and the amount of tea/wine he and Diana drunk - for some reason, this really bugged me!). Then, late last year, I decided to relisten to the audiobook and, while those problems were still there (though, not the tea and the wine problem. I saw past that the second time round), I think I enjoyed it more on second listen. And I decided that I would read/audiobook the rest of the trilogy.

And that didn't happen. I suck. Until Audible deleted a credit I had spare. I was given an extra credit for review by mistake and I hadn't used it. Actually, I think I forgot I had it till it went away. After chatting with Audible (who were super nice), they gave it back to me and I went "Ok, I have to use this. What do I really want? And I want something with length." And I remembered this trilogy and went "I have to buy them both!"

So, on 31st January, I bought Shadow of Night and Book of Life, and started Shadow of Night on the 1st February. And finished it on Thursday 15th February - so super fast for me with audiobooks!

After the events of A Discovery of Witches, where witches, daemons and vampires live hidden from humans and a fragile peace between the three species is being to break when Diana Bishop discovers a bewitched manuscript - Ashmole 782 - at the Bodlein Library which was thought lost for centuries. When a power struggle to reclaim the book between vampires, witches and daemons, Diana finds herself falling for vampire Matthew Clairmont, where interspecies relationships is forbidden.

Seeking safety, the two timewalk back to 1790 to find Ashmole 782 and to find witches who can teach Diana her magic. But with Matthew having to reclaim his old life of poet and spy for Queen Elizabeth I, the two might have to stay longer than they expected... And if they do, what damage will they cause in the present?

Ok, where do I begin with this? It's good. I enjoyed myself hugely while listening to this. It's not perfect - I do have problems with it but I enjoyed myself and am a little addicted to seeing where this series goes.

You can tell the the author is a historian because of the detail she puts in and how layered the characters (both major and minor) and the world around them is. And this works both for and against the story/series (more on that later). The story moves quite nicely and I got caught up in it and became a little addictive to it. Whenever I had a free moment, I would try and listen to the audiobook (and luckily, I can do that at work, hence why I sped through this quite quickly). It also gave insight into Matthew's history as he is a vampire who has lived over a good few centuries, which was interesting up-to-a-point (again, more on this later), which was an eye-opener for Diana.

Plus, I enjoyed listening to this due to the characters - I adore Gallowglass and I would love to read a book solely about him (he seems like a hot DILF - I mean, cool character - to read). Same goes with Phillipe - Matthew's father. He intrigues me and I would like to read more about him and Matthew's mother, Ysabeau. I do feel this book is more character driven compared to A Discovery of Witches, which while still character driven, did have a plot pushing the book forward.

There's something about this book and this series I hugely enjoy, but that's not the say that there wasn't problems. There were problems. And I have read and watched reviews on Goodreads, Amazon and YouTube and some I do agree with. The book is LONG. The audiobook I listened to is over 24 hours long and this is because of Deborah's writing. It's full of details, descriptions, side-characters and plots that aren't needed. If some of these were removed, the story would have been shorter and the reader wouldn't have lost anything. This problem existed in A Discovery of Witches and I sense will still be here in Book of Life and the newly announced Time's Convert (A companion novel following a side-character, Marcus - another character I really enjoyed reading in A Discovery of Witches). I get why she's writes these details, to immerse us in the world she's creating, but there are moments and chapters where it feels like the details are more important than the plot.

But my biggest issue within this is Mathew. Now, I admire that while I have got swept away with the romance between Diana and Matthew within Discovery of Witches and in this book, I have huge problems with Matthew. I get he is a problematic character - he reminds Diana over and over again that vampires are possessive over their lovers, there were several huge occasions I went "This feels borderline emotional/mental domestic abuse". Add into this that Matthew seems to be involve in every historical event of importance and Diana discovering that Matthew suffers from an vampire illness called Blood Rage (I understand what it is, but have no idea how to explain), there was a good amount of this audiobook where I disliked Matthew hugely.

I get the feeling that this series is going to get a very similar reaction to me reading/audiobook The Queen of the Tearling series by Erika Johansen. Yes, there are problems and things I don't like, but I enjoy reading/listening to this series and am having a blast sinking my teeth into a fantasy series that has meat on the bone.

Maybe this is a sign of my reading taste changing and me growing up (SURELY NOT?!), but I hope to have listened to the audiobook of the third and final book in the trilogy, The Book of Life, before Easter, and with Sky One turning the series into a TV drama event, we shall see where they go with the series...