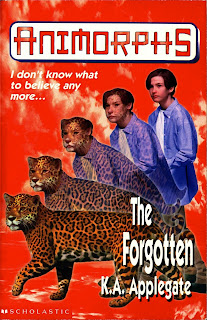 I am blaming Better Words podcast for this.

So, I was listening to a random episode when the hosts, Michelle and Caitlin, were chatting about podcasts they listen to. One of them mentioned a recent discovery - The Babysitters Club Club - and how it was funny, thoughtful and cool to hear two guys reread and chat about the book series. Now, I have fallen out of love with my recent podcast obsessions (so much so, I had unsubscribed to several of my faves - Nightvale, No Such Thing As Fish, etc) and scared of going near news/comedy based shows (Brexitcast and Friday Night Comedy from BBC Radio 4), I thought I would give this a whirl. But I didn't. I never read Babysitters Club so wasn't sure if I would enjoy it. So, I wondered what books I read when I was younger. And the answer jumped into my head very quickly: didn't I go through a year-long phase of reading KA Applegate's Animorphs? And look, there's two Animorphs podcasts you can listen to - Thought-Speak and Morph Club.

So, after binging random episodes of Animorphs books I never read (my obsession lasted a year and I think I quit the series halfway though the David trilogy so around book 21/22), I thought What if. A dangerous question but what if this series was super awesome and stupid preteen me quit too soon? Shouldn't I go back and see if it holds up? So, probably against my better judgement, I bought a very battered second-hand copy of the first Animorphs book I ever read: The Forgotten (aka book 11 of the series).

Ok, before I go further, history lesson time! Animorphs was a sci-fi series, written between 1996 to 2001-ish) about five preteens (well, at the start of the series) seeing a spaceship crash and, after trying to save the alien's life, gaining the power to morph. This power comes with a huge problems as these five are the only ones that can stop a secret alien invasion of the Yeerks coming to take over the planet. The series was written under the pen-name KA Applegate (which was wife and husband duo, Katherine Applegate and Michael Grant) and then, around book 25, was ghostwritten (though Applegate gave highly detailed outlines for each book).

Apparently, Scholastic tried to reboot the series in 2011 with new covers and update some pop culture reference but, due to poor sales, they stopped this after republishing the eight book in the series, The Alien. Since then, this series has been out of print and can only get second hand.

And with that out of the way, The Forgotten. The eleventh book in the series (and told from Jake's POV), we follow the Animorphs who discover someone crashed a Yeerk spaceship. But the Animorphs decide to try and get he spaceship and show Earth that they are being invaded. But with Jake getting weird flashes of something, the Animorphs and some of the Yeerks (including the leader of the invasion, Visser Three) find themselves in another place, another time, and with little to no way of getting home...

I read this in two hours. It wasn't that taxing and it was nice to read something I could switch my brain off to. And I get why my preteen self enjoyed reading this. It was fast paced, and it was fun to read. We had kids and aliens transforming into animals and fighting back against aliens.

But, my 30-something year old self does go "You know, if this series was going to do a true reboot, then this book would be much longer than 170-odd pages, the type would be smaller and the plot would be much much darker".

I think there has been a definite change in stories and their tone from when this was first published (in the UK, 1998) and now (2018 - 20 years gap!). The books would have been longer, darker, gritter and maybe not so long a series run (Animorphs ran for 52 books and this doesn't include the spinoff books such as Megamorphs, the Chronicles and Choose Your Own Anternamorphs [which I didn't know existed till researching this!]).

Although this was a nice nostalgia read (I did buy another secondhand book from another KA Applegate series, Everworld - because, apparently, I have more money then sense), it shows how much I have grown and changed as a reader over the past *mumbles so no-one hears exact number* years.
Posted by Pewter Wolf at 07:30:00