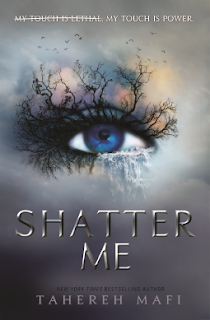 After years of hype and excitement in the US, a UK publisher - Electric Monkey - finally picked up the rights to publish the Shatter Me series in the UK. And not only are we getting the trilogy, Tahereh Mafi is writing an extra three books within this world as TV studios write a TV pilot based on the world.

For those who aren't aware of this series, Shatter Me follows Juliette, a girl who has been held prisoner in a cell without human contact for over 200 days. Why? Because her touch is lethal. Anyone who touches her will fall red within seconds. If she wasn't a threat, she would be the perfect weapon. But something expected happens that no one sees coming...

A boy touches her. And he survived her touch...

The series follows her journey from there, continuing through Unravel Me and Ignite Me. The fourth book in the series, Restore Me, sees Juliette and those who survive thinking the war they fought in is over. How very wrong they are...

If that doesn't wet your appetite, here's a trailer to feast your eyes on...

Anyway, to celebrate the release of the series so far coming to UK bookshops, the lovely people at Electric Monkey have given me the series so far to give away! One lucky winner will win a copy of Shatter Me, Unravel Me, Ignite Me & Restore Me!

Ok, the boring info-dump time! For you to enter contest, fill in the form below. That's it. Nothing more than that. Although, heads up, this is a UK addresses only contest, and this contest will end on Thursday 22nd March 2018 at 7pm. The winner will be chosen at random via random.org and will be announced on Twitter. Once done, will email the winner for details for the books can be posted to them as soon as the publisher can.

With that out of the way, good luck and may the odds be ever in your favour.