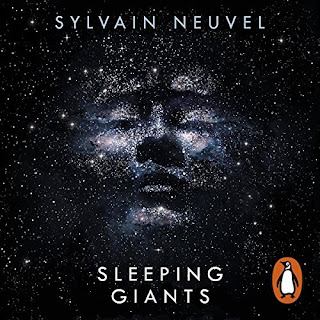 After listen to the Mythos audiobook, I wanted to listen to another audiobook with that addictive quality. I'm not 100% sure what made me decide to get Sleeping Giants by Sylvain Neuvel, but I have loved the cover art for it since it first came out and, after listening to the sampler a few times, I went "Ok, I need to listen to this."

In Deadwood, USA, a girl fell into a hole. When she was discovered several hours laters, she was found in the palm of a giant metallic hand. Years later, the girl has grown into Dr Rose Franklin, who is asked by an unknown figure to lead a team to discover the rest of the metallic body.

But the metal used in the strangest Rose has ever seen, and when a forearm is discovered halfway round the word, the race is on to find all the pieces before other countries discover them. But are these pieces meant to be discovered? Where did these pieces come from? And what's going to happen when the pieces are put together?

This was such an gripping listen. Am kinda glad I audiobooked this rather than read as I think I would have struggled. Most, if not all of this book/this series, is told in transcripts, very much in a similar style to Illuminae trilogy by Amie Kaufman and Jay Kristoff. But this had a huge cast so this felt like an audio play rather then a audiobook, and this worked as the names went over my head so the voices helped me so much. So, production wise, this was stunning!

The story itself is interesting. This comes under sci-fi when you look on Audible, and while I agree up to a point, this book did feel more like a political thriller with a sci-fi twist. I sense that, as the trilogy goes forward, the science fiction element was became more pronoun at the end of Sleeping Giants will be pushed more to the forefront of the story. But the advertising for it felt out of step, and while that would annoy some people, I actually didn't might the political thriller element, as I watch shows such as Blacklist and Blindspot so I slipped into it with easy.

But I really liked the story. It was slower paced than what I was expecting, but it moved at a good pace, fast enough to keep you listening but slow enough to make you go "Well, this would be realistic in real life". The characters felt interesting yet flaw. I am surprised intrigued by one of the main character who we learn nothing about. He has no name, he let's nothing slip about himself to anyone and he pushes the story forward with back-up plans and "friends" in high places. This story felt like a sci-fi book I could very easy sink my teeth into and could very easily devour the entire trilogy in a ridiculously short space of time.

Barring this, I found Sleeping Giants an addictive listen and I really want to continue with the series. I will have to stick with audiobook rather than reading, and if/when I do continue with this, I will have to put reading book 2 and 3 of the Illuminae trilogy on hold so I don't get myself into a knot over which book is doing what or merge the plots together...
Posted by Pewter Wolf at 07:30:00