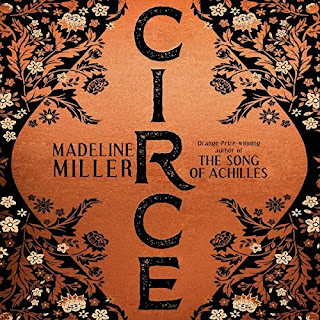 I’m a sucker for a Greek myth. You can probably see that from the last few weeks of what I’ve reading. But, I’ve had my eye of Circe for a little while and I just wasn’t sure when/how I was going to read this. But after trying to figure out if I should get the pretty Hardback in my local Waterstones/Foyles, I went for audiobook - because why not!

Circe takes the Circe myth and twists it on its head, to explain who she was before and after that well known myth of her. First daughter to the Titan God, Helios, Circe doesn’t have the looks, the voice, the grace of divinity and is rejected from gods and water nymphs alike. Soon, she turns to mortals for companion. Soon, she falls in love with a mortal and, fearing his death, she does something she doesn’t know she can do: magic.

But when her second unknowing spell backfires in a horrible fashion, Circe tells the truth about what she has done and wrathful Zeus banishes her to the island of Aiaia, throwing her into exile. But rather than being a curse, it might be a blessing to Circe who discovers that she is a witch and slowly learns her craft. It is here that the Fates throw our people into her path: the messager god, Hermes. The craftsman, Daedalus, and his young son. Her sister and her minotaur. The golden fleece, and Odysseus…

Soon, her independence and her solitary draws the wrath of both god and men alike. To protect herself and the people she holds dear, Circe must make a choice about who she is: god or mortal…?


I must admit, right off the bat, that I have never read Madeline Miller’s debut, The Song of Achilles, which I have wanted to read since it was first published but haven’t due to The Fear. I have this on my kindle and, because of the Circe, I plan to read this within the next 6 to 8 months. I am super intrigued on Achilles.

But enough of Achilles, what about Circe? Well, I really enjoyed myself. I very nearly love this audiobook and the story itself. It’s not flawless, but I will get to why.

But I fell for this. I love how Circe grows as a character from the start to the very end. She becomes stronger, not just in her craft but mentally and as a woman. She might be Greek myths’ original feminist (and if you look at Greek myths, you see that if you weren’t a goddess, a woman couldn’t be strong or independent without the gods or men punishing you. Look at what happened to all the women Zeus raped. Did the goddesses take pity on them and punish Zeus? Hell no. Hera, Athena and Aphrodite and others would punish the women most severely and Zeus would get away with it because he was king of the Gods and a man. And, as we have seen time and time again, it’s always the woman’s fault because she tempted the men… [insert eye roll here]).

Speaking of this, this explains why Circe turned the men in the pigs in the first place. So, while this is only used in one scene, this is a trigger so if you effected by this, you might want to jump this scene. You’ll know when it is as it’s her first encounter of mortal men on Iaiaia. You have been warned.

Now, I did say that I nearly loved it. There is two reasons for this and these come at the start.

The first is the narrator and the second is Circe when she is growing up in her father’s courts. The two aren’t connected but thought I would put them together. Like I have said multiply time, a narrator can make or break an audiobook and, sometimes, you have to listen and warm to them. This is what happened to me when I was audiobooking A Discovery of Witches audiobook. I didn’t like her at the start but I loved her when I was an hour or two in. The same with Circe. It took a little while for me to click but once I did (I can’t remember when it was but it was long before she was banished), I was totally on board with the narrator.

The second of Circe was her at the start. When she was in her father’s courts, I found her to be quite weak and was always wanting more from her. Now, like I said earlier, she grows into herself, into her confidence and into her womanhood, but at the start, without knowing this was to come, I was hoping she would grow and hoping she wouldn’t be one of those “pathetic” women you are promised in “reimaginings” that always falls flat. I went into this book with the promise of a complex lead, don’t fail me! I shouldn’t have worried, but it took me a while to warm to this Circe. Knowing what I know now, I shouldn’t have worried as this made her growth all the more rewarding. But at the time…

This is one of those books I know I will be wanting the beautiful UK hardback to (I got this on my kindle when it was a Kindle Deal of the Day for 99p) so I know I will be reading this in the near future and, like I said earlier, I will be reading Song of Achilles soon. I just can’t believe I waited till now to discover this author and I will be await her next novel with excitement.
Posted by Pewter Wolf at 07:30:00