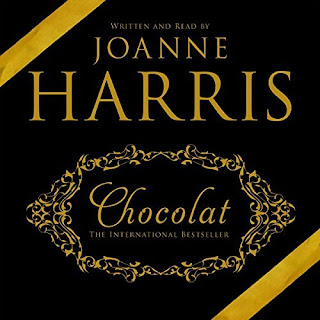 Joanne Harris is one of those authors. You know the one I mean. An author you admire and respect from a distance, but never read any of their books. Joanne was one of mine - I do have a eProof of A Pocketful of Crows on my kindle, waiting patiently for its turn. But I always have been curious over Chocolat. But whenever I try to start and read the sampler, I never clicked with the voice. But I knew I wanted to read this.

The quiet life of small French village, Lansquenet, is thrown up in the air when an exotic and mysterious stranger, Vianne Rocher, and her young daughter arrive and open a chocolate boutique. Just before Lent, the traditional season of self-denial. Father Reynaud denounces her and her shop as a serious moral threat to the faith.

As the community takes sides, passions and conflict flare. How can you balance the solemnity of the Church against the sinfulness of chocolate…?


Ok, this is going to be tricky as I am writing this a few weeks after finishing the audiobook, and as we all know, my memory is shocking! I have to write these within a few books of finishing either wise it becomes a bit of a mess!

Anyway, the story. I’m not going to say anything about Joanne narrating as I adore Joanne’s reading of Chocolat, but you got beat of the story with her. Who better to read the story and get the pacing of the story right than the author?

Now, the story. I am in two minds over this. I liked this. I liked this hugely - I listened to the audiobook within 4 days! That’s how fast I powered through this. It just clicked, audiobook wise. Also, I have seen the movie and was surprised over how much darker the book actually is. It has a bitter edge to it in the way it tackled certain subjects (which could be seen as triggers so be on your guard. Check what other people say before you start reading/audiobooking)

I liked this was, at its heart, a story about a village and the people who live there. Yes, Vianne did stir something up and gave people the courage to find themselves, but it was about people and how they coped.

But, there were problems. Well, for me. The first is, because this was an audiobook, it did take a while to get all the names and voices straight in my head. There were several times I went “Wait, you’re not who I thought you were”. A good example of this is that Chocolat is narrated by two people - Vianne and Father Reynald - and there is no warning that the narrator is changing. You usually figure out who it is within the first few lines, but it was jarring the first few times it changed from the warmer voice of Vianne to the harsher, colder voice to Father Reynald.

There were one or two storylines/characters that, now I come to think about it, were a little harsher or ended more bluntly than I expected. I get why this happened, but at times, it felt as if all the villagers were bad or were seen in a negative light whereas Vianne, though trying to come to terms with herself, was positive. There was no real light/dark with certain characters.

Which leads me to whether or not I want to continue the series, going to Lollipop Shoes, Peaches for Monsieur le Curé and upcoming The Strawberry Thief. I am in two minds over this. I’m fairly certain I don’t want to read Lollipop Shoes. It never appealed to me and knowing one of the subject matter is identity fraud, it doesn’t sit right with me. Both Peaches and Strawberry intrigue me because I know so little about them. I might - MIGHT - read these, but I think I would audiobook these. But only if Joanne Harris narrates the audiobooks. I think I would happily listen to these stories - all three of these stories - if Joanne Harris narrates these. Though this has been thrown as Lollipop Shoes is 99p on the Kindle UK's Month Deal so... hmm...

I did like this, but I think due to the pace I hammered through this audiobook, I think it kinda washed over me so maybe, maybe, I might have to go back to this and take this at a much slower pace.
Posted by Pewter Wolf at 07:30:00