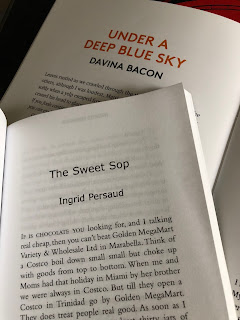 You think after last year that I wouldn’t be invited back to watch Front Row after the “Boob at the Beeb” incident (go back to my post last year to read about that!). But nope, I was asked back and  jumped at the chance to go! I mean, stories, awards, wine, sign me up!

Expect for the wine part. You see, last year, the award ceremory was held at BBC Broadcasting House. This year, it was at the University of Cambridge. In Cambridge. Which meant I had to either drive or train it up. And because I am a little stubborn, I decided to drive, meaning it took around 1 hour and 25 minutes there and the same back. Now, I don’t normally do this is any event.The event has to be special!

Plus, Cambridge is meant to be stunning, right?

So, after a surprisingly easy drive up to Cambridge, and trying to find somewhere to park without getting too badly lost (Yes, I got lost and Cambridge is full of bicycles. I have never seen a city with so many bicycle riders!), I slipped into University of Cambridge, trying not to think too hard that this will be the only time I will ever get into a university without the fear of crippling student debt hanging over my head or wondering if I was smart enough to be there.

Oh yeah, the panic I felt about possibly going to uni when I left college came screaming back (I think I would have done publishing/english or something linked to myths, so classics? WHO LAUGHED!?)

ANYWAY - was on the “Invited List” so after getting pinned with name badge and wrist band, just waited for the right time to go in. And when that happens, I went back on my old game of People Watching And Imagine Their Lives. But, with it being me, I made it more dramatic. That man is in love with her, but she’s married to his best friend and he’s engaged to the man in the grey jacket. That woman there is thinking of starting an affair. The man with the tie is thinking of leaving the country for some unknown reason. Why, though?

If you haven’t done this and you want to write (or, like me, don’t think you’re talented or thick-skinned enough, do this. It’s really interesting where your brain goes…) 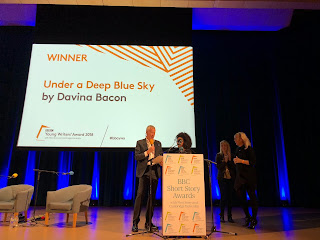 Then, we were told we could go in and, as I joined the line, I bumped into Amy from YA Under My Skin, her hubby and instagramer The Roaming Reader (who’s name has gone clean out of my head as I was getting told off by Amy for not reading Laini Taylor’s Strange The Dreamer, Robert Galbraith’s Lethal White & Career of Evil, not watched Buffy or Game of Thrones and other things that made her go “Oh, Andrew…”) so, while we were getting ready for Front Row to start, we were chatting about books and the short stories from both the National Short Story Awards and the Young Writers Awards. (If you want to listen to the episode and hear the reactions, click here and have a listen!)

So, I hear you ask. Which one did I hope would win out to the two? Well… that would be mean. But I will say that I did have loyalty to Footprints In The Far Field for Reyah Martin as I posted an extract on the Pewter Wolf, but I feel that from all the extracts, all of them could win. As for the National Short Story Awards, that’s a little more tricker. There was one story I liked more than the other four - The Minutes by Nell Stevens - but again, all five stories were so strong, any of them could have won and I would have been hugely impressed.

The show went out and it was revealed that the winner of the BBC Young Writers Awards 2018 is Under a Deep Blue Sky by Davina Bacon, a story about poaching. The story will be told on BBC Radio One in the next few days and, I think, BBC Radio 4 as well, but don’t hold me to that.

After that, it was time to announce the winner of BBC National Short Story Award 2018. That honour went to The Sweet Sop by Ingrid Persaud. Now, am going to admit this, went it was announced, I was both delighted and jaw-dropping surprise. Now I need to reread or relisten to the story again (I listened to it via the BBC Short Story podcast - which is good as I love audiobooks but I think if I read it, I would get the beat of the story better. Good thing I have a copy of the stories so I can reread them all at my pleasure. I might do a week where I read a story a day and talk to you guys about it… Oh, that might be fun/terrifying… let’s do that sometime in the future! 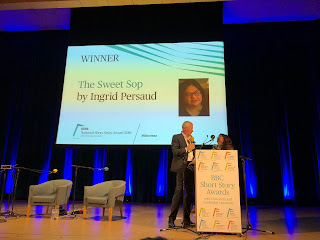 So, after that half an hour show (really, Front Row is only half an hour long. I always thought it was 45 minutes), those of us that were were invited were taken to the University of Cambridge’s Library (which was open after hours just for this event! Feels special) for drinks, chat and, most important of all, to look at all the posh books! I saw Annabelle from ED PR briefly before the library but couldn’t find her again (due to driving home time) and I bumped into Rosi from Walker and David from Discover Children Story Centre quickly.

After that, the long drive home. I didn’t get into till quite late and had the joy of my cat waking me up at half past 5 this morning (something he’s started to do over past few weeks and I have no idea how to make him stop!)

Now, I have to sign off as I need to write one more blog post today and then, READ! Maybe catch up of Great British Bake Off (I’m spoiler-free on who left last night! HOW HAS THIS HAPPENED?!). But, before I want to thank ED PR for asking me to being involved in BBC Young Writers Awards blog tour and being an Ambassor. It has be a wonderful experience. And to everyone involved in the BBC Young Writers Award and BBC National Short Story Awards, thank you for your tireless work.

Now, onwards and upwards for 2019’s shortlist… Oh yeah, am thinking ahead for my next short story read… 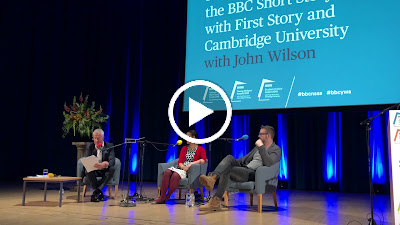