Book Review - The Case Of The Missing Treasure 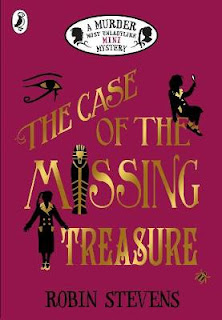 For the past few months, I’ve been itching to get back into the Murder Most Unladylike series. I have no real reason why - I read Arsenic For Tea - the second book in the series - back in 2015 and I read a Mini-Mystery, The Case of the Blue Violet, in 2016. And I always said that these were fun and I wanted to go back.

But for one excuse or another, I never did return and, when I tried, I couldn’t find my “in”. I tried with the fourth book in the series - Jolly Foul Play - and struggled and I didn’t want to read the starter in the series. Plus, for some reason, the later novels appealed to me, with the fifth - Mistletoe and Murder - catching my eye. I’m sorry, but murder at Christmas. Doesn’t that gripping?

So, when I went into my local Waterstones to have a look, I saw The Case of the Missing Treasure and jumped straight on it. At last, a fast “in” for me. Plus, it’s a Waterstones exclusive (for now - most booksellers will be able to sell this in match 2019) so, at the present moment in time, you have to go to your local bookshop and buy it! HAHA!

After the events of A Spoonful of Murder, Daisy and Hazel are back in London, staying at Daisy’s Uncle Felix and Aunt Lucy. One morning, they hear a news article, saying that a thief is robbing museums all over London. On Daisy’s birthday, Uncle Felix sets up a treasure hunt for her, Hazel and friends/rivals, the Junior Pinkertons, the four find themselves in the British Museum, trying to solve clues that Uncle Felix and Aunt Lucy have left. Expect… one of the clues they find isn’t from Uncle Felix or Aunt Lucy. One clue is from the thief and they are going to rob the British Museum that night!


This was so much fun. I think you might have noticed that I have been reading quite a few heavy stories of late and this was a lovely refresher/sorbet to my reading pallet. It was fun and I enjoyed dipping in and out and rediscovering my love of Middle Grade.

Now, this is a novella, a short story, so this is one for the fans or people curious over the series as it gives a favour to the series. Expect, while it does, it doesn’t. All the short stories within the series (or Mini Mysteries) are told from Daisy’s point of view. She’s a little spoilt, impressive and is much lighter, which suits the short story mysteries. However, it’s her friend, Hazel, who writes the novels and her voice is much different. Her voice is more serious, which is more suited to the murders the two have to investigate. I’m not sure if I could read this series is Daisy wrote the novels - her voice might grate on readers when dealing with the subject of murder.

I did enjoy myself with this, though I did wish it was a tad longer. There is a sneak peek of the first few chapters of the seventh book in the Murder Most Unladylike series, Death on the Spotlight, and I did read a chapter and a half before stopping myself. I am planning to read this, but want to go in blind. Plus, at the time fo writing this, I have bought Mistletoe and Murder and A Spoonful of Murder, so I want to read these in the next few months before jumping into Death in the Spotlight.

But I think this is a short story for the fans of this series and this has finally given me the push to get into this series again! And I can’t wait!
Posted by Pewter Wolf at 07:30:00