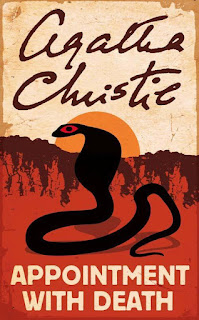 This has been sitting on my Kindle for quite some time (I’ve just checked - since September of last year. I got it in an eBook sale, I think) and I’ve always wanted to read this when I was in the mood for crime. Plus, it’s Agatha Christie so it can’t be a bad crime story.

In the past few months, I read then audiobooked three Agatha Christie's (The Mysterious Mr Quin, The Murder of Roger Ackroyd and And Then There Were None) as well as read a New Hercule Poirot mystery, written by Sophie Hannah (The Mystery of the Three Quarters) and each had their own success and pitfalls. So, when I remembered I had this while reading Time Convert, I knew I wanted to read it. I wanted to read a murder and this ticked the boxes.

Poirot overhears this one night as he was closing his hotel window and thinks nothing of this remark. But this remark comes back to haunt him several days later when he is told of a death. Among the towering red cliffs of Petra, the body of Mrs Boynton was discovered, like some swollen, detestable Buddha or a spider. She could have died of natural causes - expect for a small puncture mark on her wrist… Was Mrs Boyton murdered? Poirot decides he will try and find the truth and gives himself 24 hours to solve the crime. But with that remark in his head and seeing how damaged the Boynton family have been under Mrs Boynton rule, will the murderer get away with it…?


Now… I am going to admit that I am torn on this as this is an interesting story and I found the first 40-50% of the story a gripping read. It was interesting reading about emotional domestic abuse and the damage it causes on the family (though I wasn’t a fan of how some characters dismissed it. I know it was a “different time” but still…). But Christie tackled this, it removed the element that Agatha Christie is a “cosy” crime write. She wasn’t cosy. If she was, I don’t believe she would take this.

I liked the whole build-up because we knew a murder was going to happen and, in an awful way, you knew Mrs Boynton kinda deserved to die (she was a horrid character). I liked the build-up, the tension, the looking for people to say something that made me go “Take note of that.”. I had to play detective because, barring the first chapter, Poirot didn’t turn up to till after the murder had taken place. In most of his novels, Poirot is usually there at the start and we, the reader, go with him. There’s only a few times that Poirot turns up quite late to his own novels (off the top of my head, the two I can think of is Cat Among The Pigeons and The Clocks).

But I liked the tension that the first half of the book had.

The latter half of the book is where I fall a bit flat. It loses some of the tension that I liked. Yes, we have a deadline to solve the murder - 24 hours - but Poirot puts that in place himself. And, I don’t know why, but I didn’t sense any urgency to him solving the case.

Plus, I feel that, after years of emotional abuse the family received from Mrs Boynton, we didn’t see any aftermath to it. Not relief, freedom or trauma. Again, different time, but still… it felt like a slight mistep.

The murderer’s reveal. This and the epilogue I feel the most annoyed over. I know from listening to several Agatha Christie podcasts that, when she turned this book into a stage play, Agatha Christie changed the ending and removed the epilogue. From what I read and what I heard, I much prefer the stage’s ending as, to me, it makes the most sense. But this ending… I remember reading it going “Wait, what? What? But… that doesn’t make sense to me!” and I can’t get away from that fact. I know that, if I reread this at a later date, I would be watching out more for these clues and go “Ooooh”, but I just felt that the murderer didn’t fit the story.

And as for the epilogue. Like most epilogue’s in YA, it was a mistake.

I think my problem with Agatha Christie is that I want to try her lesser known novels - this happened when I tried to read her when I was in my teens. I go for the titles that aren’t as hyped so when I read the resolution, they border on the realms of the ridiculous.

Now, I’m not giving up on Christie. I think I will go towards a more beloved title for my next read. But Appointment with Death… a mixed bag for me. A strong start but the ending didn’t stay strong.
Posted by Pewter Wolf at 07:30:00