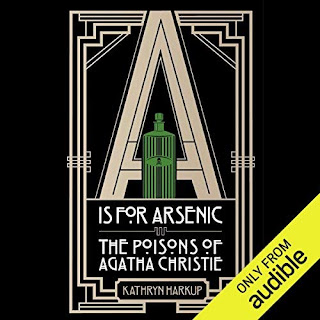 Agatha Christie was a chemist throughout both World Wars so her knowledge of poisons was extensive. A is for Arsenic looks into the poisons Agatha Christie used in well-known novels, such as Mysterious Affairs at Styles, Crooked House, Sparkling Cyanide and 4.50 from Paddington among others novels, and look at how the chemicals interact with the body to cause death, to cure the poison, real life cases and look at how the murder was committed in the novels.

I’m in two minds over this. I did like this, but I think I would have preferred reading the book rather than audiobooking it. The reason for this is when it talked about the poisons and how they interact in the body to cause a reaction or death, I did feel like I had to rewind it a few times to understand the science being described. I think if I had read this, I could have reread the pages a few times or google the words that caused me to go “Ok, I don’t know what that means”.

What I did find interesting was the real life cases in connection to the poisons used. There was one that made me go “I want to know more about this”. This was Dr Thomas Neill Cream, also known as the Lambeth Poisoner. The reason this case intrigued me the most was how the story ended. After found guilty of poisoning his victims in the US and then in England (maybe Canada and Scotland), he was hung. But before he died, he was heard saying “I am Jack the …”. Now, this was where the story ended in A is for Arsenic, so I went to Wiki and did some digging. While some people believe Cream was Jack the Ripper, others disagree. Police officials never heard Cream say this, plus records show that Cream was in prison at the time of the Ripper murders in 1888 (though some people say Cream could have very easily bribe prison officials so he could have left the prison before his official release or his prison sentence was severed by a look-a-like [this last seems utterly absurd to me]). Also, some people wonder if he said “I am ejaculating” due to possible loss of bodily functions out of fear.

Plus there are other real life cases mentioned in this book that I want to research but as I don’t have the physical book, I can’t backtrack over names and poisons with the greatest of ease.

While I thin Agatha Christie fans and people who like science and medicine will like this, I would say the physical or ebook version of A is for Arsenic is much better than audiobook.
Posted by Pewter Wolf at 07:30:00