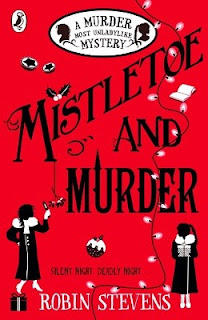 T'was the night before Christmas, and all through the house, not a creature was stirring, because a murder was announced…

I’ve been meaning to return to the Murder Most Unladylike series for ages! So, when a few months back, I saw the short story of The Mystery of the Missing Treasure at my local Waterstones, I bought that, read it and went “Ok, I have to return now.” and, rather than start at the first mystery and work my way through, I know I wanted to return into this world with either Mistletoe and Murder or Spoonful of Murder, the fifth and the sixth instalments in the series. And with Christmas a few weeks away, I knew it was going to be this one that would win…

In case you haven’t followed the Pewter Wolf for a while, I tend to do this a lot with series. I’m not 100% sure why I do this but ha-ho!

Arriving in Cambridge to celebrate Christmas 1935 in style, Daisy Wells and Hazel Wong are hoping for snowy Christmas with Daisy’s brother and, to everyone expect Daisy’s hopes, this will be a quiet Christmas.

Expect it’s not. Danger lurks within the halls of Maudlin College for an tragic accident happens. But it’s an accident, a prank gone horribly wrong… right? Daisy and Hazel aren’t so sure so they call on all their Detective Society skills to find the truth. But with a rival agency looking into the accident as well, they have to solve the case quickly. Was it an accident? Was it murder? And can they solve the case before Christmas Day?


This was such fun!

Ok, before I go any further, I want to say something super quickly. While this is the fifth book in the series and there are nods and references to previous cases, you can read this as a standalone and you will be ok! But if you have read the previous mysteries, you will understand the references better and adds an extra layer to the story.

But this was such fun to read! I always felt like I was smiling while reading this - there’s something wonderfully comforting about it. 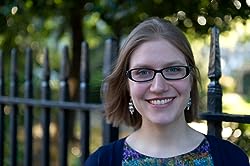 I want to say something about the book/series as a whole. The amount of diversity in it in wonderful and I loved it! We have Hazel who is from Hong Kong, we have Harold & George Mukherjee who are Indian Hindu, we have characters who are part of the LGBT+ community. And seeing at this is set prior to the Second World War, the characters face sexism, racism, homophobia, prejudice head-on and how Robin tackles these issues are delicate yet powerful. My fave scene linked to this is quite early on when a character (who dies due to the prank) says “Another Chinese? Isn’t it a bit much? Why, we English will begin to feel outnumbered soon!” (page 60) and we see an instant reaction from Hazel and the other characters reactions to this. And that fact these issues are tackled in a what some people class as a middle-grade series is wonderful!

As someone who does like a good murder mystery (am still a newbie to the genre, I feel), I enjoyed the case and how twisted it got and how the characters slowly solved it. Every now and then in crime books, I find the first half of the book fun as it’s setting the murder mystery up, but the latter half quite weak as it’s the characters’s trying to solve it, but with this book, I never felt that. It felt strong and solid all the way through. I never saw the ending coming.

Like I said earlier, I do have this and Spoonful of Murder but I had such fun with this book, I have to resist driving straight into Spoonful as am saving that for next year when I start to push myself into the crime genre more (I will talk more about this in the New Year), and I added a good few books in the series on my Christmas Wishlist (I really want Death in the Spotlight) but this was a perfect pre-Christmas read for me and I can’t wait to drive into the rest of the series in the future!
Posted by Pewter Wolf at 08:00:00