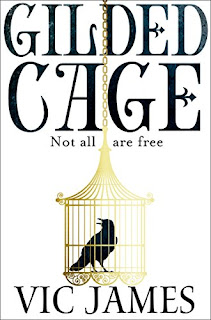 You can blame Olivia from That Fiction Life for this! IT'S ALL HER FAULT!

Ok, allow me to explain. For the past few months - maybe even year - Olivia has been banging on about this trilogy that she thought I would love. You might know, if you follow a few book bloggers/vloggers/podcasters/etc that we usually have one book or trilogy/series that we want to force onto other people and go "YOU HAVE TO READ THIS!" and this trilogy was Olivia's. I usually trust Olivia's judgement, but for some reason, I tried to read the sampler of Gilded Cage on my kindle and my brain goes "Nope".

But when I saw it for 99p, I knew I had to buy it and, when I bought it, I said I would read it before the end of the year. Then, after chatting to Olivia at one or two bookish events (The Twisted Tree and Time's Convert), I decided that it was going to be my next read. I felt ready to try the Cray Cray (her words, not mine).

In a frightening similar world to our, Gilded Cage follows Abi, Luke and their family as they have to serve their slavedays - ten years of labour that commoners must serve - whereas magically skilled aristocracy - Equal - rule. Somehow, Abi has managed to get the family to serve the oldest Equal family, the Jardines. But on the day they have to go, the family discover that Luke won't be going with them, but to a factory town of Millmoor...

Separated from each other, the family must do the best they can. Abi must work with the Jardines, watching her little sister look after the Jardine's Heir's baby daughter (rumours say he killed the commoner mother), and slowly falling for the middle Jardine son, an Equal without magic. And at Millmoor, Luke gets into a club and slowly, begins to dream of rebellion...

And all the while, the political backdrop is filled of blackmail, uprisings and backstabbing and with a possible rebellion on the horizon, things will take a dangerous turn...


You'll think, with all the Brexit happenings that have happened the past few weeks, I would dislike this. I admit that, at one point, I had to take a step back from this due to Brexit, but I'm surprised how much I enjoyed reading this. There was something addictive about the writing and the twists that kept me coming back (though I had very little time to read due to one reason or other. Mainly work and me having to leave earlier, eating my reading time).

I am going to say right now that this isn't going to be for everyone. This is political and we don't stick to one person's point of view. I think someone said this book has around ten (though they are all told in third person) and while I understand why Vic James did this - to get all sides of the same story - some of you will find this incredibly frustrating. Even now, I do think one or two POVs weren't exactly needed and, if push comes to shove, we could have only really needed Abi's and Luke's. And, due to the number of POVs, you do have a disconnect with the characters - you don't feel their pain, their blossoming romance or political hunger. I got into the story because of the political "What the heck?!" twists, but I can't say I connected with the characters.

Another thing is that I found the Equals fascinating. I wanted to spend more time with them because, yes, they are Slytherins (of the worse kind) and if we just followed them, it might have been too much, but I would happily have read the entire story from their side. It's because they're villains and yet, up to a point, they don't realise that they are villains and reading that would have been interesting.

The last quarter of Gilded Cage is really fast paced and sets everything up for the rest of the trilogy, whereas the first three quarters are setting the world up. I found the world frightening (some people will say it's frightening close to ours if we are not careful) and I'm curious to see what happens to the characters and the world due tot he political climate in the rest of the trilogy.

Like I said, I did have to take some time away from this book due to Brexit so if the political climate of the UK and international is getting to you, you might want to dodge. Same if you're beginning to have your fill of Orwellian, Handmaid's Tale, dystopian-type books as this series fits in this field of genre.

Will I carry on with the trilogy? I do think I will. But I might want to after March 2019 when the Uk leaves the EU before I go back as my brain can only handle so much politics. Or maybe I should read this around the time the UK leaves the European Union... We shall see, but I do want to see where this series goes next as Gilded Cage left on quite a huge moment...
Posted by Pewter Wolf at 08:00:00