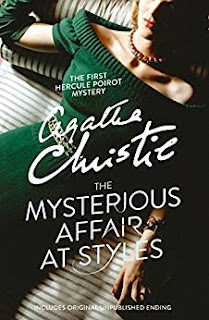 As you guys know, last year I rediscovered Agatha Christie. I read Mysterious Mr Quin and Appointment with Death, audiobooked And Then There Were None and The Murder of Roger Ackroydd and read Sophie Hannah’s take of Poirot with The Mystery of the Three Quarters.

And this year, I decided I wanted to read a few more Christie mysteries. I don’t have any real plan of what books I was planning to read. Whatever I could get my hands on cheaply, but I knew I wanted to read 4 Christies and maybe one more Sophie Hannah’s Poirot.

So, when The Mysterious Affair At Styles came up on my kindle for 99p, I jumped at it. Agatha Christie’s debut novel and her first outing with Poirot was too good to miss. Plus, I didn’t know the story that well compared to her more well-known titles such as Murder on the Orient Express.

After the Great War, Captain Arthur Hastings is invited to Styles in Essex to help him recover from his injuries he received from the War. It’s the last place he would expect to discover a murder. But when his hostess dies, her body spasming in her bed, anyone in the house could be killer. But Hasting is very lucky as, in the village, a small group of Belgian refugees lives, and one of them is a former detective. A detective who is growing bored of retirement…

So, what do I think of Poirot’s first outing?


Well… it’s not what I was expecting.

I think the main reason I feel that that is this book feels so different to Murder of Roger Ackroydd, which is the third novel in the Poirot series (but the fourth in reading order as the third title, Poirot Investigates, is a collection of short stories). Murder of Roger Ackroydd feels like the Poirot I know from my dealings with him via television, radio, films and precious attempts to read Agatha Christie in my mid/late teens (though I can’t tell you anything about them expect the titles and they were very late in Poirot’s history). But this Poirot felt very different. He was more energtic, which is slightly jarring.

Another thing that bugged me is that the case. The story takes place over a period of two/three months. Now, from the little I have read, Poirot usually solves the crime very quickly, usually within a week or two at the most. In the book’s I’ve read, he solves them with 48 hours or less. So it came as a shock when Hastings would jump forward in time. I get why Christie did this as Poirot kinda explains at the end, but still…

I think the reason why I nitpicked all of this and a few other things (there was one or two occasions I went “I like this, but I am bored! Hurry up!”) is because this is Agatha Christie’s first novel. She is finding her voice and her learning her craft of writing. We forget this as she is so well known with her other, more popular and more successful titles, but she had to learn and grow as a writer to get to the level she became in those later titles. It’s like JK Rowling - compare Harry Potter and the Philosopher’s Stone to one of her more recent titles, or even Harry Potter and the Deathly Hallows and you see how much growth Rowling went through and this is the same with Christie. You can tell she is a good storyteller, but she’s not quite there compared to her later titles.

This feels, a little, like my feelings to Appointment with Death where I liked the ideas of certain things, but disliked others. I think with most Christies I have read, each have had successes and each have had pitfalls.

I’m glad I have read this, but I didn’t get the reaction I wanted from this, sadly. I think I might still to some of Christie’s later and more well-known titles such as ABC Murders, Crooked House and possibly reread Murder on the Orient Express.
Posted by Pewter Wolf at 08:00:00