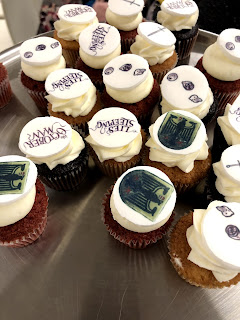 Last week, the day before I had to get up SUPER early for a mini weekend-break, I was kindly invited to Gollancz with a bunch of other bloggers, booksellers and bookish people to see a preview of Gollancz upcoming titles, plus a handful of others from Gollancz sister imprints such as Trapeze, Orion and a few others.

Now, I have to be honest, there is no way I can write a small thing about every single one of these titles. There was, to my appalling note taking hand-writing, over 20 titles. OVER 20 TITLES!!! And I think if I sat down and wrote them down, you all would be bored stiff and go “You want to talk about this? Seriously, Andrew?”. Plus, some of these titles are hugely well known. For example, the first adult fantasy novel, Angel Mage, by Garth Nix (WHO I LOVE SO OF COURSE, I WILL BE READING, AND IF YOU HAVEN’T READ HIS OLD KINGDOM SERIES, I WOULD BE UPSET! Go read Sabriel as it is wonderful) or Leigh Bardugo’s first adult fantasy, Ninth House (I mean, does she really need an introduction? I haven’t read her Grieshaverse and even I know about her and am super curious on this one!). So yeah, gonna be buying these!

I can easily talk about Victoria Aveyard’s Broken Kingdom, a collection of novellas set in her Red Queen world (I might try to read this series again… maybe…) or talk about Stephen Chbosky’s Imaginary Friend, his first novel in 20 years after his hugely successful Perks of Being A Wallflower. Or maybe the sequel to Branden Sanderson’s Skywards, Starsight. Or The Sky Weaver, Kristen Ciccarelli’s third book to be set in the Last Namsara world, known as Iskari.

My point is there is so much I can talk about and trust me, I have video and photos to share on my Instagram and Twitter so they are about!

But let’s chat about some other titles that catch my eye that could be seen as flying under the radar, And believe, there is a few I REALLY want to talk about.

So, in no order, let’s get this book party started! 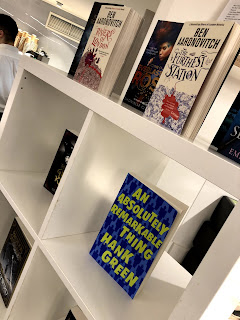 Let’s start with Ancestral Night by Elizabeth Bear. Now, apparently, Elizabeth Bear is a huge deal in the sci-fi genre so it’s a bit shocking that this will be her UK debut novel. It’s a space opera (a subgenre of sci-fi I am still a bit rogue over but Becky Chambers’s novels are helping) and I know very little expect from a space scavenger and their partner makes a discovery of a lifetime. I sadly didn’t get my hands on a copy of this (will explain why a little further down!) but I am intrigued over this one. When Gollacz were chatting about this title, I did sit up a little straighter and went “OK, I need to make a note about this one, if I can”.

From sci-fi to historical fantasy we go with Smoke in the Glass by Chris Humphreys. Now, the author is known for being a historian so this is a bit jump for him, but this sounds so up my street that when I was told this was on NetGalley (a place to get Advance Reader Copies in ebook form. Will save Gollancz post & packing), I requested it without any thought. This is the first book in a trilogy that follows three kingdoms. In one of the kingdoms, the Immortals live and you don’t known if you are an immortal until you die and then come back again (so of course there are cults and other dangerous things). But suppose there is a fourth, unknown kingdom? Suppose this kingdom is slowly, quietly, trying to take over the other three kingdoms? Suppose they are killing immortals and keep them dead…?

Shadows of the Short Days by Alexander Dan Vilhjálmsson is a little hard to describe as it’s hard to pigeonhole within a genre (and that’s sometimes is a good thing, I find). It’s fantasy but with dark elements of Icelandic noir to it. It’s not just these but I’m not sure how else to explain it. So, let’s keep this one vague, shall we?

The only reason I want to read A Little Hatred by Joe Abercrombie is because the video he did to sell us the book was hilarious! It was one of those awful 80s TV ads where he lay on a bearskin rug in front of a fire. Am hoping Gollancz shares it as I didn’t record this, but it was so cool! Joe is the author of The Blade Itself series (a series I should have read) but A Little Hatred is a standalone (I think am wrong about this) first of a possible trilogy or series. The Age of Madness has arrived and in a world of war, politics, revolution - oh wait, that’s the United Kingdom at the moment! Joking aside, this is an adult  fantasy and this sounds a little up my dark twisted street.

This title (my penultimate) has me on the fence. I am intrigued by it but this sounds a little scared at the same time. But what’s wrong with being a little scared by a novel? The Song of the Sycamore by Edward Cox is a standalone sci-fi set in a broken world set in an endless war where Wendal Finn died in battle. And yet, Wendal returned to his home city, his body possessed by something called the Sycamore, an ancient entity out to avenge all the victims of murder. But the city is full of sinners… 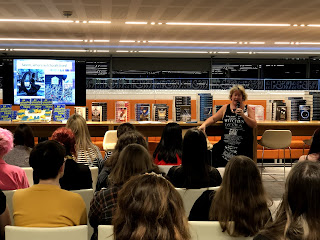 The last title is one I think all us book bloggers and booksellers got excited over. Sanctuary by VV James (or Vic James, author of the Gilded Cage trilogy) has been described as Big Little Lies meets The Craft. Four women, all with a dark secret, find themselves at the heart of a murder investigate. Mirroring the Salem Witch Trials, what happens when herd mentality takes hold of a small town…

VV James was at the event and she chatted about her research, saying she was inspired by a mix of things: the Women’s Marches that took hold over all the world, #MeToo and #believewomen, the town of Salem and the story of the singer Lana del Ray hexing US President, Donald Trump, due to stories of sexism, racism and homophobia. 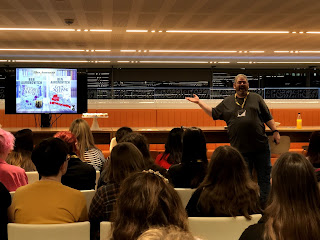 Another author that was at the event (and who made me feel guilty that I hadn’t read him yet) was Ben Aaronovitch. He was there chatting about his upcoming novella, set in the Rivers of London world, The October Man. This novella, though set in that world, is a little different as this story is set in Germany. He chatted about why he wrote this story (the character wouldn’t shut up and the fact Ben visits Germany so often as the series sells really well in Germany!). We also heard an exclusive extract from the audiobook (same goes for Ben as he’s never heard it before). He, also, chatted about the paperback release of Lies Sleeping. This is the seventh book in the series and he chatted about a publicity idea he has done for the last few paperback releases, which was send booksellers alcohol. It was done with the two previous paperbacks with cider and gin. Lies Sleeping is going to have vodka and, there were two tasters of vodka that the publisher had us choose from. The winning vodka would be sent to booksellers - it’s gonna be a surprise.

Sadly, I couldn’t try the tasters as was driving home as VERY early start the following day for holiday (I woke up at 4am! UNGODLY HOUR!!!).

So, what titles am I excited over? Well, I loved the audiobook sampler of The October Man so much that I preordered it that very evening (nervous laughter inserted here as I now need to binge read the series. Though, if I broke series order, that wouldn’t come as much of a surprise to anyone, really…? And like most of you are aware, I do have the first Rivers of London novel on my kindle). I want to read Garth Nix SO BADLY (don’t you know me at all, dear reader?), as well as Sanctuary and Ninth House. I am super intrigued on Smoke in the Glass and Ancestrial Night and, because of the author’s promo, I really want to read A Little Hatred (should I preorder this on audio?). Now, the rest I am going to keep quiet as I want to surprise you dear readers and the publisher (be afraid, Gollancz! Be very afraid!!!)

But before I sign off this post, I want to thank Gollancz for hosting a wonderful evening! It was fun and I always forget that once I get to these events, I have a blast (though I do go through a small moment of Impostor’s Syndrome). Plus, my Other Half would like the thank the vultures known as other Book Bloggers because it is a known rule that bloggers are demons when it comes to free books and, because of the mass (and the fact I was dying for a glass of water), I came home with no books. HE WAS SO HAPPY! He thinks I’ve developed self-control (laughs) I haven’t… but no one tell him that as, a fews into our mini-break, I saw a deal for Daisy Jones and the Six in hardback for less than a fiver and I bought... SHHH!!!!
Posted by Pewter Wolf at 08:00:00