SURPRISE BLOG TOUR REVIEW ALERT! I bet you weren’t expecting this, were you? Well, it’s always nice to keep you guys on your toes! So, before you send off your DNA off to that DNA ancestry site, sit down, have a cuppa and read my review of my first Michael Connelly, Fair Warning! 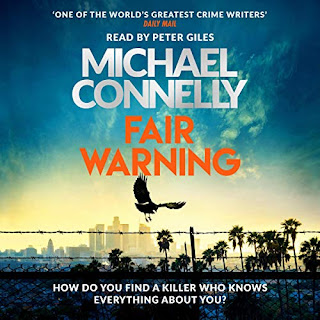 So, my first Connelly! When I was asked if I wanted to review this, I jumped at it, only reading the first few lines at the press release. Then self-isolation happened and that affected how I audiobooked this so, heads-up that this review might be a tad more clinical than it would have been if life was “normal” and was listening to this a few months ago and a few months into the future. So, this is my first Michael Connelly so forgive me if I make a mistake or question something that is explain in previous novels.

Anyway, with all that out of the way, let’s get to it!

Veteran journalist Jack McEvoy is used to tracking down killers - he’s done that with The Poet and The Scarecrow. But he thought that when he started working at non-profit consumer journalism website, Fair Warning, those days were behind him. But when the Police come to his home and question him about a one-night stand he had over a year ago, he’s confused. Till it’s revealed that the woman is now dead, and she believed she was being cyber-stalked and the Police, having little to no evidence, think Jack is a possible suspect.

Horrified, Jack begins to investigate, against the warning of the Police and his own editor. But when he stumbles on the fact that this death isn’t the other death with the same method of killing. And all the killings have another thing in common - they all send their DNA off to the same cheap DNA testing site. Is there a serial killer out there, using the same DNA profiling to select their victims? Is it the same person who, on the Dark Web, calls themselves the Shrike?


This audiobook, to me, is split into two parts.

The first part is the slow burn. The part where Jack is slowly pulled into this case and investigates, putting the clues and threads together to reveal that this isn’t one small story where he has to prove his innocence, just in the case the Police up him from “Person of Interest” to “Suspect”, but a much bigger story with huge consequences. Now, I did find this first half a tad slow for my taste, but I get why this had to be. This is when things are slowly revealed and certain things have to be moved to so the second half of the book can move. The second part of the book is almost break-neck speed. Things move very quick and you have to move quickly with it, otherwise you’ll get left behind with clues. Now, I much prefer my thrillers to move at speed so I prefer the second half of the book and I found once I got to this point of the novel, I ran with it and I found myself making time to listen to the audiobook, whereas with the first, slow-burn part, I struggled to stay engaged, even though I knew it was important to the plot.

I found the idea of, at time of writing, the US unregulated area of DNA testing and the lack of what DNA testing site do with your DNA after they test it for your ancestry genuinely terrifying. I consider doing this briefly while in self-isolation but nope. Not gonna happen now I audiobooked this! Plus, with the audiobook having two narrators - Peter Giles and Zach Villa - each showing a different side to this unregulation, it adds an extra layer of horror.

Once I found my feet with the story and the characters, I whizzed through it (though I would have gone through it much quickly if I wasn’t in self-isolation). But I am very intrigued to read more from Michael Connelly and may try one or two more of this works in the future!
Posted by Pewter Wolf at 08:00:00