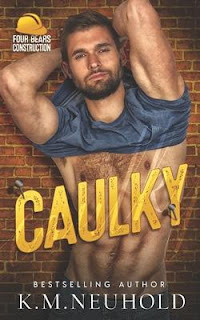 I have no idea how this book got on my radar. I generally don’t know. I think I was research another book and I stumbled on Caulky that way or if someone mentioned this on Goodreads and I preordered it on a whim. I can’t remember, but I might have started self-isolating by then and, as you have seen, I have gone hard on the romance side of my TBR.

The first book in a gay romance series, Ren is going through a nasty break-up. With another relationship down the drain, Ren decides to give up hope of ever finding the One and decides to try hook-ups with random guys every now and then while living a solitary life. In a bar, Ren picks up a handsome stranger, thinking he’ll never see him again. Shame that Cole is an owner of the construction company and the constructor who’s redoing Ren’s bathroom…

And, to make things more You’ve Got Mail, both guys have faceless profiles on a gay dating app and they chat to each other, becoming friends with snarky comments.

That’s right. We have a weird little love triangle with two people, but who don’t realise that they are the same person…


I read this in a three days and it was a delight! A light, sweet and quite hot and steamy read (there is sex. A lot of sex), perfect for the beach or these dark times (like I said earlier, I seem to be going hard into romance since self-isolation!)

What surprised me the most while reading this is how fresh this feel. When you read a romance, there’s a troupe or something that you see coming and you know will cause problems further in the book, quite close to the end. And yet… it didn’t. Now, I admit I am not well read in romance so maybe the troupe was there and I missed it, but lack of troupe was refreshing.

So were the characters. Cole and Ren felt like characters I’ve not read before. Ren, thirty-something with tattoo sleeves, is ready for casual hookups after having his heart broken one too many times and is very careful with the idea of a relationship (the only real angst of the story). He’ll be already alone with his bees. Cole is 42 (I can’t remember the last romance I read where the romanatic lead is in his early forty - they’re usually in their 20s or 30s), a construction worker who enjoys his single life and sexual encounters, and never attempted having a relationship (his brother, Ollie, has that gene). 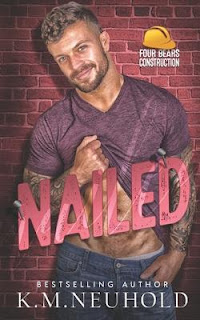 Oh yes, this has You’ve Got Mail all over it and you spend a good chunk of the book going “When are they going to figure it out?!” (though, I will admit that it’s a tad improbable). I went into this thinking the reveal would happen quite late in the game, with maybe one fo the characters figuring it out halfway through and then trying to woo the other in real life. But both figure it out at the same time and the reveal is much earlier than I expected. It’s nice to be kept on our toes a little.

I did get a little muddled with a few characters (mainly Cole’s brother and two best friends who all work together at Four Bears Construction, who the series will be following), but as the story went along, I managed to get them all straight in my head. Plus, each book should, in theory, be read without reading the rest, but this set up nicely the next book in series, Nailed.

I’m not much of a romance reader, but there’s something about reading this that makes me excited to read more romance and I am very much tempted to buy the sequel and get started immediately (though my TBR is very out of control!).
Posted by Pewter Wolf at 08:00:00